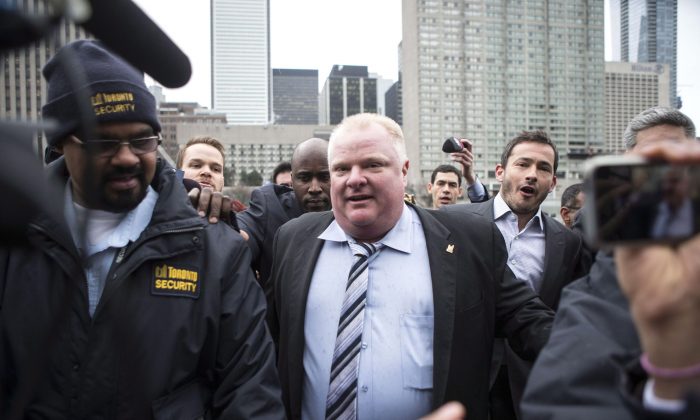 Toronto Mayor Rob Ford is pursued by the media outside city hall in Toronto on Wednesday, March 19, 2014. A video of Ford smoking what appears to be crack cocaine was found on the laptop of an alleged gang member, who also apparently filmed himself describing how to "catch a mayor smoking crack," police allege. (The Canadian Press/Chris Young)
Canada

Video Shows Ford Smoking ‘what appears to be a narcotic,’ Police Say

TORONTO—A video of Toronto Mayor Rob Ford smoking “what appears to be a narcotic” was found on the laptop of an alleged gang member, who also apparently filmed himself describing how to “catch a mayor smoking crack,” police allege.

A detailed description of the so-called crack video is part of a document, released Wednesday by an Ontario Superior Court judge, containing police allegations used to obtain search warrants in an ongoing investigation involving Ford.

“Mayor Ford is holding what appears to be a glass cylinder in one hand and a lighter in the other hand while engaged in conversation with individual(s) off camera,” police describe.

The document contains police allegations not proven in court.

The video appears to have been filmed surreptitiously at 7:57 p.m. on Feb. 17, 2013, showing Ford “consuming what appears to be a narcotic while inside a residence,” police allege. It was Sunday of a long Family Day weekend in Ontario.

Ford has admitted smoking crack cocaine, likely in one of his “drunken stupors,” but has said he hasn’t seen the video. Ford has urged police to release it and he has also dared Toronto police chief Bill Blair to arrest him.

Through his lawyer, police offered Ford an opportunity to watch the video on the condition he not comment on the video or discuss it with anyone, but he declined, police say in the newly released document.

‘They don’t have any charges’

Ford refused to comment Wednesday, but his lawyer, Dennis Morris, said the police offer was “baloney.”

“We weren’t interested in that. If you want to show the video, show the world,” he told The Canadian Press. “Don’t show it to me and the mayor and say, ‘You can’t discuss it.’ That’s absurd. It makes no sense.”

Morris called the release of the document a “continued waste” of taxpayers’ money. “No one could say what’s in the pipe,” he said.

Morris also said he is convinced police will find a way to release the video anonymously just before the Oct. 27 municipal election, which will determine if Ford gets to stay in the mayor’s office.

“They’re doing everything they can to hurt the mayoral campaign and they don’t have any charges, so the only bullet they have in the gun is this video,” he said.

“The police are relentless in their pursuit of the mayor. They want to just throw more crap onto the wall hoping something will stick.”

Five videos in total were found on the computer of Mohamed Siad. Police believe Siad, one of dozens of people charged in the Project Traveller drugs, weapons and gang investigation, was trying to sell the so-called crack video, previously released documents indicate.

Three seem to be failed attempts to record Ford leading up to the full video, and finally there is a video of someone who appears to be Siad filming himself “giving a short narrative of what was just captured,” police say in the document.

“Siad advises that to record someone secretly you should aim the camera towards that person and they won’t know what you’re doing as your (sic) just playing with your phone,” police write.

“He then advises that’s how you would catch a person slipping. He then goes on to say ‘Or even catch a mayor smoking crack.’”