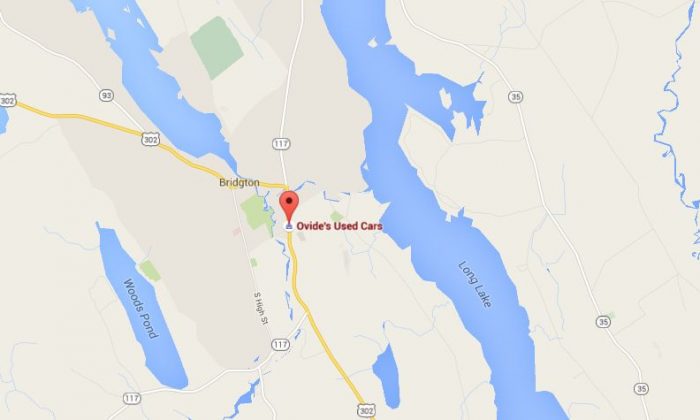 A fire has destroyed a used car dealership in Maine, it has been reported.

#UPDATE – Officials say a fire destroyed Ovide’s Used Cars in Bridgton. Five people and two dogs were inside at the time. They all made it out okay.More Details Here: http://bit.ly/1PmRnKI

Video footage and photos showed the destruction, with flames leaping high above the cars on the lot.

At least a dozen vehicles were damaged or destroyed, the Bangor Daily News reported.

This is what it looked like when we got to Ovide’s in Bridgton. Details on devastating fire at 5 p.m. on @WMTWTV. pic.twitter.com/GK7Z7iaVV2

“We were concerned about the fuel tanks in the cars and other fuel that’s on scene in the building and wanted to make sure that we got ahead of the fire as quickly as we can and keep the crews safe while we’re doing that,” Bridgon Fire Chief Glen Garland told WMTW-TV.

“I think we had 15 cars that had fire damage and another 25 or 30 suffered heat damage,” Garland added to the Portland Press Herald. “This is a pretty significant loss.”

The lot, Ovide’s Used Cars, is located on Route 302 in Bridgton. Police closed a portion of Route 302.

Five employees were inside the building when it caught on fire. One person suffered minor injuries.

They said the fire may have been caused by a car that was being worked on. Garland said an investigation is needed.

“We couldn’t have done it without help from our neighboring towns,” Garland said of the response to the fire. “We just kept calling until we had what we needed.”