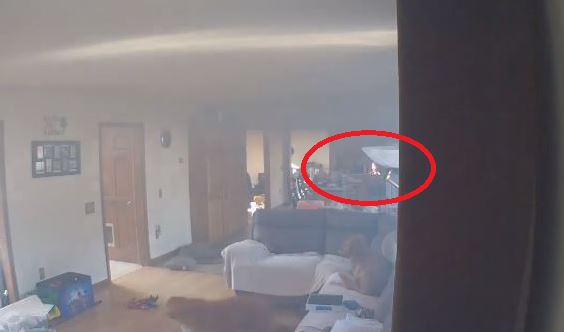 New footage shows a fire starting after a dog stole leftover pancakes from the stove in the home where it was left home alone.

The pup was at home in Massachusetts with no humans and a second golden retriever when the scene unfolded.

Home surveillance footage shows the dog getting on its hind legs to reach the pancakes and eat them.

Just moments later, a blaze erupts on the stove and smoke quickly fills the house.

The home was saved, though, thanks to an alarm system that alerted emergency responders.

There was damage but the blaze was controlled by the responders, who arrived minutes after the system went off.

The footage was published by the Southwick Fire Department, which responded to the fire, as a promotion for alarms.

The fire department noted that when the dog reached for the food, it “hit the ignition button on the gas stove.”

“If you have pets or young children in the home look into safety covers for your stove controls,” the department warned. “In this case, the homeowner was connected to a monitored alarm system calling responders saving severe damage.”

People responding to the post shared tips and comments.

“There is a device you can install under the microwave above the burners on the stove that extinguishes any stovetop fires. it may not be very pretty but it would have put this fire out long before the police and fire dept got there,” one Facebook user said.

“Thank goodness it wasn’t serious, our startup Wallflower Labs Inc. has developed a stove monitor that would have detected the dogs turning the stove on and would have alerted the homeowners,” said another.

“Very lucky family. Home monitoring systems are extremely valuable and not that expensive,” said yet another.