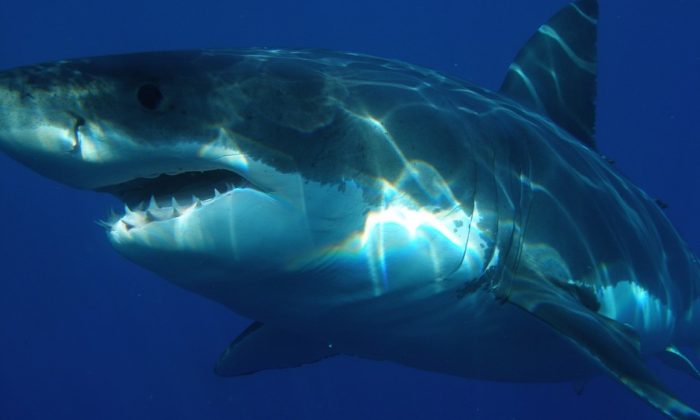 Stock image of a shark. (Skeeze/Pixabay)
US News

A rare deep-sea feeding frenzy involving sharks eating another fish was captured off the coast of South Carolina, according to video footage.

The National Oceanic and Atmospheric Administration (NOAA) posted a video of the sharks eating a dead swordfish about 1,476 feet below the surface.

But as the sharks gnaw on the large swordfish, another large fish known as a wreckfish creeps from behind NOAA’s remotely controlled vehicle and eats a shark.

“Equally interesting is observing the wreckfish ambush a small dogfish,” which is a species of shark.

The wreckfish used the rover as cover and “demonstrated the ability of large predatory fishes to feed on smaller sharks,” the agency wrote. “The wreckfish appears unable to feed on the swordfish directly itself, but by joining the sharks, it was able to feed on an animal that was.”

“Normally we don’t see any deep-sea sharks in a group or aggregation, unless there is some nearby patch of food. As relatively small apex predators, they spend a great deal of time searching for prey. When a large food fall occurs, like a 250-plus pound swordfish, the ability to detect and locate the food, and then maximize food intake, is the key to growth and survival,” the researchers noted.

“The swordfish was clearly recently deceased, perhaps only by a few hours, given the condition of its body and the rapid disappearance of its flesh into the stomachs of the sharks. The cause of the death of this majestic animal is unclear, perhaps owing to age, disease, or some other injury. There was no visible hook or trail of fishing line suggesting this was a lost catch. However, any type of injury would have been masked by the massive damage caused by hundreds of shark bites,” it added.

The researchers were originally exploring the area for a World War II shipwreck as part of the Deep 2019 expedition near the Southeastern United States, which ran from May 30 to July 12.

“I would not worry about seeing these sharks,” Thomae told the news outlet. “In fact, they are not in feeding mode. What they are doing is they are finding the warmest water that they can just to warm up.”