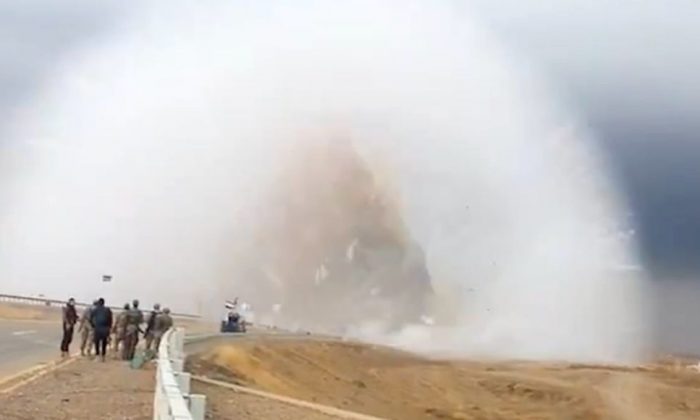 A car bomb exploded in Iraq’s northern city of Samarra, according to a report from the Popular Mobilization Forces, an army that was formed to fight ISIS.

A person with a cell phone captured the blast that went off in the distance.

Samarra was attacked in June 2014 by ISIS as part of its offensive.

The bomb blast comes as an ISIS-held town in Sinjar, Iraq, was “liberated” by Kurdish fighters. The town was held for more than a year.

“I am here to announce the liberation of Sinjar,” Iraqi Kurdish leader Massoud Barzani was quoted by the BBC as saying.

The BBC reported that Kurdish Peshmerga troops are walking through the middle of the roads to avoid bombs on the roadside.

The troops went to the base of Mount Sinjar at dawn on Nov. 12. Some prayed and huddled by campfires before moving to their positions, reported the Washington Post. Meanwhile, Yazidi fighters pledged vengeance against ISIS.

“It was a tragedy, and we carry a great sorrow in each of us,” Salim Shevan, a 28-year-old Yazidi fighter, told the paper. “We will have revenge.”

Approximately 7,500 Peshmerga troops, backed by U.S.-led airstrikes, took the town over quickly, CNN reported. The Kurdish commanders estimated that around 600 ISIS fighters were inside the town.

Sinjar is on the highway connecting ISIS’ territory in Syria to Mosul, Iraq. Some analysts said it’s a big step in dividing ISIS’ hold over the region.