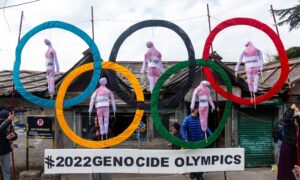 A video shows a Baltimore teenager punching a teacher in the face at Frederick Douglass High School this week, gaining tens of thousands of views on Instagram.

The video appears to show two students arguing while standing near the teacher. One student backs away while the other strikes the teacher in the face and yells curse words at her.

The teacher then recoils back and the student leaves the classroom. She doesn’t fight back and follows the student out the door.

The teacher won’t return back to class this week, the school confirmed to CBS Baltimore.

“The footage of a student punching one of our members in the face is absolutely deplorable. Our teachers and paraprofessionals work too hard and sacrifice too much of their time, creativity and genuine love for teaching to be treated in such a manner by anyone, including their students,” Baltimore Teachers Union President Marietta English said in a statement on Nov. 8.

“As I stated in my testimony before the new school security policy was passed by the School Board last spring, the District must develop and implement policies that not only provide options for students who express this type of behavior, but also protection and other measures for the teachers, staff and students who bear the brunt of their rage.”

It’s not clear if criminal charges are pending against the student.

“School administrators at Frederick Douglass High School continue to investigate a physical altercation that took place today when a teacher was struck by a student following a verbal exchange. Ensuring a safe teaching and learning environment for our students and staff is paramount to City Schools. Upon reviewing the incident, school administrators will apply disciplinary action in accordance with Baltimore City Public Schools’ Code of Conduct.” Edie House Foster, with Baltimore City Public Schools, told CBS.

It comes after a California teacher punched a student in the face and appeared to strike him with a cellular phone. Last week, Marston Riley, 60, was arrested and charged with child abuse after he was recorded striking the student, who was recorded using racial slurs.

Cellphone video shows the teacher punching the student in the head in front of the class before the two could be seen fighting across the room. Riley then allegedly grabs the unnamed student and hits him with what appears to be a cellphone.

Students in the class could be heard yelling, and some students tried to break the melee up.

“It was just back and forth, back and forth, and then the teacher just decided to throw a punch and that’s when everything happened,” a student told CBS Los Angeles about the incident, saying he was scared.

A Los Angeles Unified Schools spokeswoman, Shannon Haber, said in a statement: “We are extremely disturbed by the reports of the events that occurred at Maywood Academy High School.”

“We take this matter very seriously and do not condone violence or intolerance of any kind,” Haber said, Yahoo News reported. “Los Angeles Unified is cooperating with law enforcement in investigating this incident. Crisis counselors and additional school police patrols will be at the school on Monday to support our students and staff.”

EU, US Agree To Temporarily Suspend Tariffs in Steel Dispute
0

Space Force Officer’s Book on Marxism in the Military Reaches No. 1 on Amazon After He’s Relieved
0