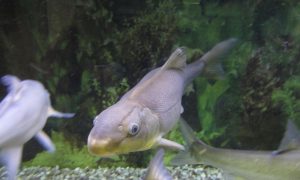 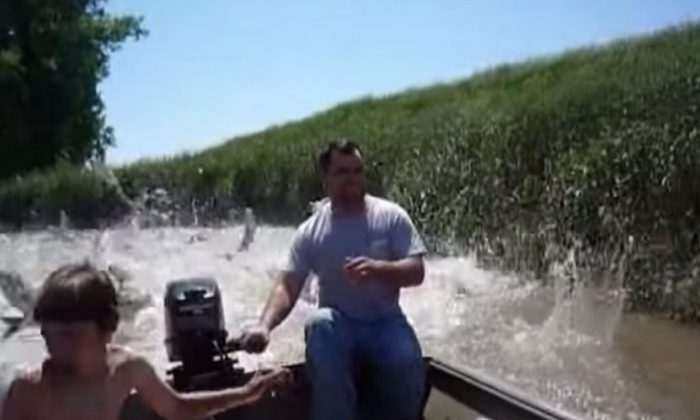 The video was captured several years ago near the Spoon River in Illinois, showing the fish jumping from the water as a boat passes by.

It may be a humorous scene for some, but to federal and state officials, Asian carp are no laughing matter.

As the National Wildlife Federation (NWF) notes, “Asian carp are fast-growing, aggressive, and adaptable fish that are outcompeting native fish species for food and habitat in much of the mid-section of the United States. Asian carp were introduced into Southern fish farm ponds in the 1970s and quickly spread across the United States. They are now on the verge of invading the Great Lakes.”

The Alton Daily News recently reported that some 1 million pounds of Asian carp are expected to be taken from Illinois waterways in culling efforts this seasons.

The U.S. Army Corps of Engineers has issued a recommendation of a mixture of technologies including loud noises and water jets in Illinois to curb the fish from reaching the Great Lakes. They also suggested installing an electric barrier.

How far should Michigan go to keep Asian carp out of the Great Lakes?

Should the carp reach the Great Lakes, they could devastate a $7 billion fishing industry and food supplies by crowding out native species of fish, as CBS reported. The measures would be implemented at a key choke point along the Des Plaines River in Illinois.

In a recent Army Corps of Engineers report quoted in the Detroit Free Press, the proposed cost of the initial plan to prevent Asian carp from getting to Lake Michigan would be $275 million.

Operating it would cost $20 million per year.

The unwanted species is taking over Tennessee waterways and becoming a major concern.

Asian carp is a “catchall name” for silver, bighead, grass, and black carp that are originally from Southeast Asia.

The silver ones “can leap out of the water when startled by boat engines, often colliding with people and causing injuries,” the NWF says.

They can grow to more than 100 pounds and eat 20 percent of their body weight every day.

“Asian carp were imported into the United States in the 1970s to filter pond water in fish farms in Arkansas. Flooding allowed them to escape and establish reproducing populations in the wild by the early 1980s.”

“At present, bighead carp have been found in the open waters of 23 states and silver carp in 17 states. Asian carp represent over 97 percent of the biomass in portions of the Illinois and Mississippi Rivers and are swiftly spreading northward up the Illinois River in the direction of the Great Lakes,” according to the NWF.

The U.S. Army Corps of Engineers was scheduled this week to release a draft report on strengthening defenses against the carp at a lock-and-dam complex near Chicago. Instead, the Corps said it was delaying action indefinitely.

Shipping interests have opposed upgrading the Brandon Road Lock and Dam to keep the carp out of Lake Michigan, saying such changes could hamper cargo traffic.

They say withholding it worsens the threat of Asian carp reaching the Great Lakes and damaging its fishing industry.