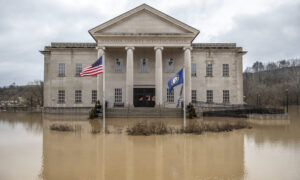 One of the six members of far-left extremist group Antifa arrested in Portland, Oregon, on Nov. 17, was captured on video spitting on and punching protesters before she was apprehended.

The latest clash between Antifa—a group that advocates openly for violence against people and groups it disfavors—and people holding permitted rallies and events began with police officers blocking the radicals from a “#HimToo” rally.

Members of the conservative Patriot Prayer group attended the rally, but said they weren’t its organizers. The organizer, conservative activist Haley Adams, said the demonstration was to support due process and men who are falsely accused of sexual assault.

After the rally, people departing the site were stalked by Antifa members and others, leading to several flare-ups of violence. People who had attended the rally were confronted by a large group of radicals, including Hannah McClintock, 19, who was distinctive in appearance because of her purple hair. McClintock “repeatedly spit at a man and hurled punches at him. I had witnessed her trying to fight people over and over,” said journalist Andy Ngo, who recorded the video.

Hannah McClintock, the woman in yellow with #antifa, repeatedly spit at a man & hurled punches at him. I had witnessed her trying to fight people over & over. She was one among six people who were arrested. pic.twitter.com/jWtX2wahw8

McClintock was later arrested on a charge of harassment.

The Portland Police Department said it saw Antifa members and other people interfering with the #HimToo demonstration using a number of weapons. “Officers observed sticks, glass bottles, lit road flares, bottles filled with a substance believed to be urine, and gopher gas used as projectiles,” it said.

The projectiles were thrown at officers and demonstrators, the police said. There were also multiple assaults reported.

Prior to the demonstration, the police noted that it was preparing to keep demonstrators and counterprotesters safe “while ensuring the peaceful exercise of the First Amendment.”

The repeated clashes between Antifa and conservative groups has left deep divisions in Portland, with Mayor Ted Wheeler often siding with the extremists against groups exercising their rights to gather in public and exercise free speech. An ordinance that he proposed, which would have given him the power to restrict some groups from holding public events, was voted down on Nov. 14, after some law experts expressed concern that the liberal mayor would abuse the power.

Meanwhile, the leader of Portland’s police union recently pilloried Wheeler for his response to Portland’s rampant homelessness and related problems.

“Our city has become a cesspool,” Officer Daryl Turner, head of the Portland Police Association, said on Facebook. “Livability that once made Portland a unique and vibrant city is now replaced with human feces in businesses doorways, in our parks, and on our streets.”

Wheeler made headlines on Nov. 15 after he was overheard muttering that he “can’t wait for the next 24 months to be over,” suggesting that he may not seek re-election.