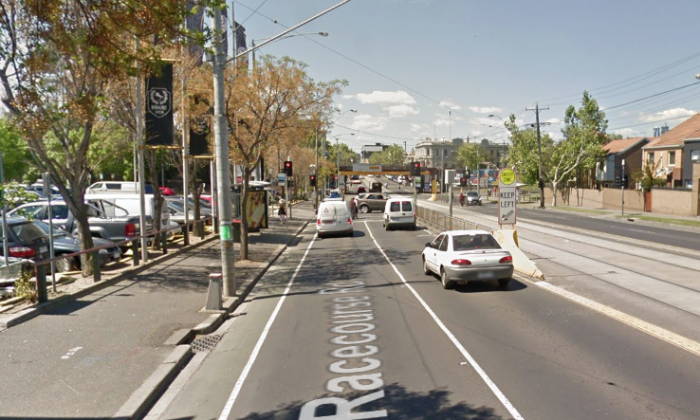 An elderly man was hit my a cyclist when he crossed Racecourse Road in Flemington, Victoria. (Screenshot via Google Maps)
Australia

Dashcam footage of an elderly man being hit by a cyclist on one of Melbourne’s busiest roads has sparked debate about road safety in Australia.

The video, posted to YouTube by Alan Donelly on Feb. 25, shows an elderly man attempting to cross Racecourse Road in Flemington through stopped traffic on Saturday afternoon. The man who appears to be in his 80s hesitates in the tram lane before he makes a dash to cross over to the outer side of the road.

At the same time, a cyclist who was said to be riding up to 20km/h between two lanes of traffic then struck the elderly man, causing the pair to crash to the ground, reported Fairfax.

The pedestrian reportedly suffered from only cuts and grazes while the condition of the cyclist is unknown, reported 7News.

According to the news station, a motorist had signaled to the pedestrian that he had a clear path to cross.

Donelly told radio station 3AW the accident was quite “sickening” to see.

“He wasn’t a large man. He looked as if he’d been tackled by a rugby player when [the cyclist] hit him,” Donelly told the radio station.

“The collision actually picked him up off the ground and slammed him into the deck,” he added.

Other people who saw the footage started to discuss which party was at fault. Some people have pinned the responsibility on the elderly man for jaywalking while other people have said the cyclist was at fault for sneaking in between two lanes of stopped traffic.

“He clearly was not crossing at a pedestrian crossing, I reckon had he been, the cyclist would have been more cautious.”

4BC Brisbane’s host Ben Davis said the cyclist should have given way to the pedestrian but the elderly man should have also checked for traffic, reported 7News.

“Lucky it was just a cyclist, it could have very easily been a motorbike,” he said.

VicRoads has also released a statement in relation to the incident.

“This case highlights the importance of both cyclists and pedestrians sharing the road safely,” the road safety authority told 3AW.

“Pedestrians must use the correct pedestrian crossings, especially on busy roads, and look out for other road users, not just stationary vehicles.

“Pedestrian crossings are there to ensure safety of some of our most vulnerable road users, including elderly pedestrians who may be at greater risk.”