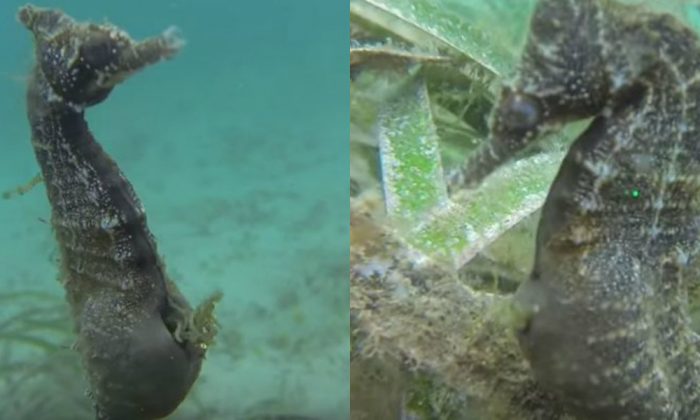 'It's surreal'
By Jack Phillips

Researchers came across a rare sight: a pregnant male seahorse.

Clayton Manning and Meagan Abele, with conservation group Project Seahorse, spotted the animal off the coast of eastern Australia. They saw the male carrying baby seahorses in its pouch.

“We were doing a survey and found a very, very pregnant male that had a tiny tail sticking out of his brood pouch,” Manning said in a statement. “I had just finished getting his measurements and a baby shot out of the opening. So we sat back and watched the father for a while.”

Manning is currently a master’s student at the University of British Columbia and is working with Project Seahorse.

Male seahorses carry the babies through their gestation and birth when the eggs are deposited in a special pouch on its abdomen. The female transfers the eggs to the male, which he self-fertilizes. The young then grow for approximately three weeks in the pouch before emerging. Around 100 to 250 young seahorses, or fry, then burst out. However, larger species can produce more eggs, as many as 1,500.

“They receive everything they need in the pouch from oxygen to food. Gestation time varies from 14 days to 4 weeks. Giving birth can be a long process with contractions lasting upto 12 hours,” says The Seahorse Trust.

“This is their time to breed,” said Abele, who serves as a Project Seahorse research assistant. “Many of the males we’re finding are super pregnant and ready to burst. It’s surreal to watch it happen.”