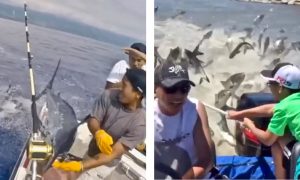 Video: Pranksters Intensely Stare at Random Passersby on Street, Watch How They React

A mysterious video has surfaced online showing the uncomfortable moment a group of pranksters cause chaos as they stare intensely and unrelentingly at unsuspecting men and women for no apparent reason or purpose.

In the video the pranksters begin by staring at one poor suited gentleman as he goes about his business in a shopping mall. They start small. First just one of the female prankster’ stares. She is then joined by a man, then another woman and another man until the poor shopper is surrounded by glaring people and is quite understandably disturbed. He leaves slowly trying to look as calm as he can.

The next person targeted fails to keep the same level of poise as a pair of dancing pranksters stop mid twirl and glare directly at him. Clearly disturbed the man backs away only to be confronted by more people staring in his face. His desperate words asking what is happening are initially ignored and he frantically backs away. Possibly due to his extreme reaction, the jokers give in and begin laughing before explaining that it was all a joke in the first place.

The prank is then taken outside and we see a conveyor belt of reactions from people. One bespectacled and confused man is asked to remove his glasses by the group which he does before he is instructed not to get pranked again. Another less impressed man is glared at as he talks on his cell phone before he ends his telephone conversation and calmly films the group of glaring pranksters who’ve surrounded him.

The video ends with the jokers pranking an irritated woman who asks them angrily, “Why are you all looking at me? Are you all playing a game or something?”