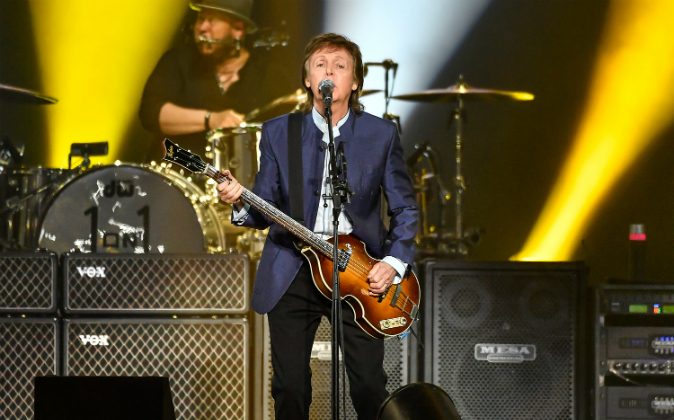 Paul McCartney performs on Opening Night of the One On One Tour at Save Mart Center on April 13, 2016 in Fresno, California. (Photo by Steve Jennings/Getty Images)
Entertainment

Prince passed away nearly 3 weeks ago and the tributes continue to pour in.

This time the legendary musician was honored by another legend—Paul McCartney.

The former Beatles member paid homage to Prince while on his One on One Tour during his stop at the Target Center in Minneapolis, Minnesota—Prince’s hometown.

As the lights on the stage turned purple and Prince’s symbol appeared on the large screen, McCartney honored the “late, great Prince” with a rendition of “Let’s Go Crazy” as he jammed out on the guitar.

“Here’s to the man,” McCartney said after playing the tune. “Loved that guy. Thank you Prince, for writing so many beautiful songs, so much music. And he’s your guy.”

Prince and The Revolution released “Let’s Go Crazy” in 1984 and is from the album “Purple Rain.” The song earned Prince and the band its second number one single on the Billboard Hot 100 chart.

McCartney is the latest of a long line of celebrities to pay tribute to Prince, including Jimmy Fallon, Bruce Springsteen, Usher, and D’Angelo.

In recent weeks, Beyonce honored Prince when she kicked off her Formation World Tour in Miami. During a short intermission between sets as the “Halo” singer switched out costumes, the lightening on stage turned purple and the crowd collectively sang “Purple Rain.”