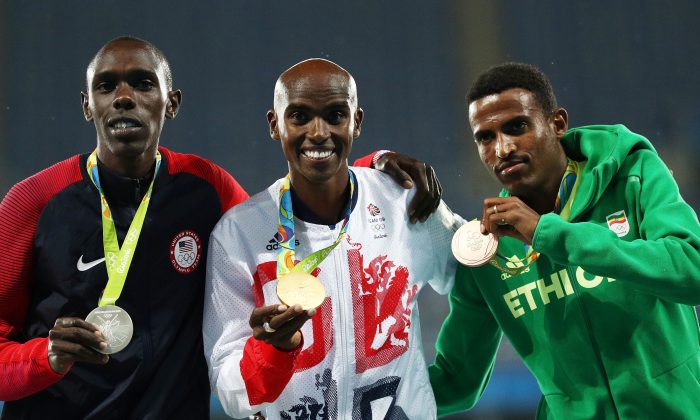 Silver medalist Paul Kipkemoi Chelimo of the United States, gold medalist Mohamed Farah of Great Britain and bronze medalist Hagos Gebrhiwet of Ethiopia stand on the podium during the medal ceremony for the Men's 5000 meter on Day 15 of the Rio 2016 Olympic Games at the Olympic Stadium on August 20, 2016 in Rio de Janeiro, Brazil. (Photo by Patrick Smith/Getty Images)
International

A long-distance runner celebrated prematurely, and it cost him a medal.

Hagos Gebrhiwet, who was in first place, thought he was about to win the 5,000-meter race before jogging off to the right side of the track and putting his arms in the air.

But the Ethiopian runner quickly realized his error.

Gebrhiwet had another lap to go and quickly dropped off the pace.

Yomif Kejelcha ran past him and won the competition at the IAAF Diamond League event.

Hagos Gebrhiwet miscounts laps in Diamond League 5000m in Lausanne. He sprints to the finish line, celebrates as bell rings signaling one lap to go. Re-enters the race and finishes 10th. pic.twitter.com/MWDy8tcoIo

“Hagos Gebrhiwet miscounts laps in Diamond League 5000m in Lausanne. He sprints to the finish line, celebrates as bell rings signaling one lap to go. Re-enters the race and finishes 10th,” according to a Twitter user who posted a video of his miscalculation.

Gerbrhiwet, 25, had won the bronze medal in the same event during the 2016 Rio Olympics, according to CBS Sports.

Researchers from Columbia University Irving Medical Center evaluated 7,999 healthy adults, ages 45 and older, who had previously participated in a separate study that required them to wear activity monitors for at least four days between 2009 and 2013.

The research team used the data from the monitors—which recorded the amount and intensity of physical activity they did—and, over the course of five years, tracked the mortalities and health risks the participants experienced.

The study found that substituting 30 minutes of sitting with light physical activity could lower your risks of an early death by about 17 percent.

Replace that sedentary time with more moderate to vigorous exercise, like running and biking, and you’ll cut the risk of early mortality by 35 percent. Even short 1- to 2-minute bursts of movement was linked to valuable long-term health benefits.

“If you have a job or lifestyle that involves a lot of sitting, you can lower your risk of early death by moving more often—for as long as you want and as your ability allows—whether that means taking an hour-long high-intensity spin class or choosing lower-intensity activities, like walking,” lead author of the study Dr. Keith Diaz, an assistant professor of behavioral medicine at Columbia University Vagelos College of Physicians and Surgeons, said in a press release.