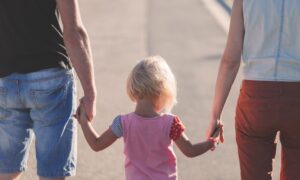 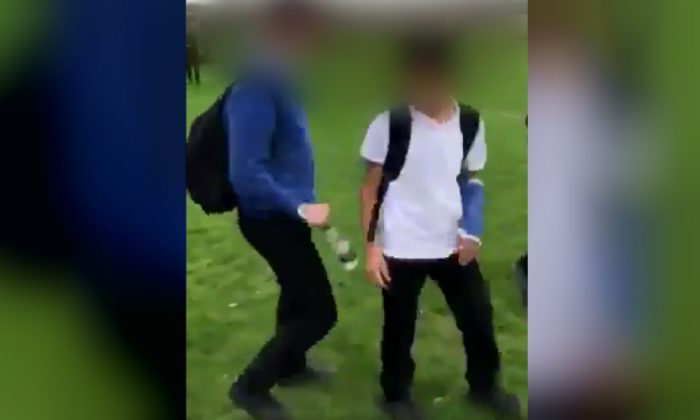 A video still shows the moment a boy identified as Jamal, wearing a cast, is approached by a boy who then strangles him at Almondbury Community School in West Yorkshire, England, on Oct. 25, 2018. (Screenshot/Twitter)
UK

LONDON—A video of a British schoolboy being bullied and strangled by another pupil has gone viral, sparking outrage and an outpouring of sympathy in the form of over £50,000 in donations.

The undated video shows a 16-year-old boy head-butt a much smaller 15-year-old whose arm is in plaster, identifying him as Jamal, as a group of school children walk across a field. After knocking him to the ground, the larger boy pours water over his mouth as he talks about “drowning” him—what many furious social media users have described as “waterboarding.”

According to the founder of a crowdfunding campaign set up to help him, Jamal is a Syrian refugee who had been bullied for months, along with his sister, at their school in Huddersfield, West Yorkshire, in the north of England.

As thousands of well-wishers donated over £50,000 in just 14 hours, other furious social media users exposed the identity of the alleged bully, paving the way for dozens to post threatening messages on the social media account.

Superintendent Steve Dodds, of West Yorkshire Police Kirklees District, said in a statement, “We are investigating a report of a racially aggravated assault of a 15-year-old boy, which occurred on playing fields at Almondbury Community School at about 1 p.m. on October 25.

“A 16-year-old boy has been interviewed by voluntary attendance in connection with the incident and we are continuing to progress the investigation.”

The video appears to have gained wide circulation on Nov. 27 after being posted by one Twitter account, Blue Days Dark Night, where it picked up nearly 7 million views in less than a day.

“The thugs already broke his arm and now mockingly waterboard him when they get a chance. Name and shame these thugs, school and police have done little to help,” wrote the twitter user.

But when locals did precisely that, not only naming the bully, but also posting his social media information, address, and telephone number, the original poster called for them to back off.

“Please please please, do not share or tweet any addresses of anyone connected with this, wrote Blue Days. “The bully is also a child, the authorities are now involved, we need to work toward highlighting such issues so they never arise, without becoming a form of bullies ourselves.”

A Blessing in Disguise

The local parliamentarian, Barr Sheerman, who represents the town, said the video assault was “absolutely shocking.”

“[I] understand from council that the school have taken strong action,” he tweeted. “Will be following up to ensure all available support is being given!”

The founder of the funding page, Mohammed Tahir, said that Jamal’s family struggles to meet the basic necessities of life. “We want to raise money for the family to ease their situation and hopefully they can use the funds to help improve their quality of life and to put a smile on their faces.”

“Having left a war torn country, the least they deserve is to live in peace without being harassed. Please donate generously and let’s change this horrible situation into a blessing in disguise for them.”

According to Tahir, Jamal’s sister had her glasses broken by bullies and had attempted to cut her own wrist in the school toilets.

The Facebook page identified by locals as belonging to the bully—which appears to match the face in the video—is now plastered with angry comments.

Alongside frequent quotes from the violent Peaky Blinders gangster series, the alleged bully’s Facebook posts show an interest in outspoken Islamic critic Tommy Robinson—seen as evidence by some angry social users of a “far-right” interests that stirred racial hatred. Robinson strongly rejects the “far-right” and racist labels he is often given in the media and by critics.