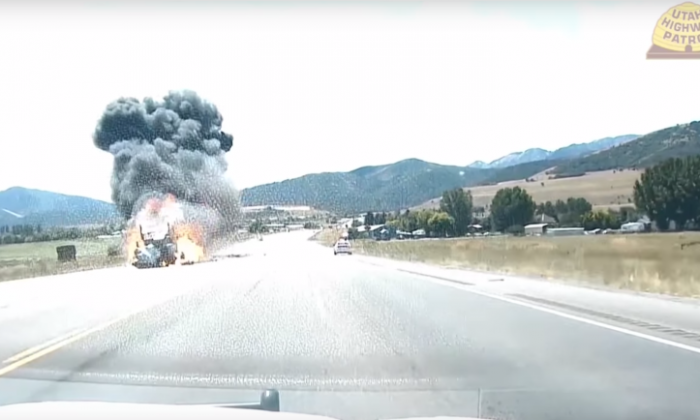 Video of Police Chase, Crash That Led to Nurse’s Arrest for Doing Her Job Surfaces

Warning: The video might be disturbing for some viewers
By Jack Phillips

A video showing the dramatic police chase in Utah that led to a hospital nurse refusing to draw blood from a patient, leading to her arrest, was released.

Alex Wubbels, a nurse for the burn center at the University of Utah hospital, was arrested by a police officer in July after telling him that she wouldn’t draw blood from a patient, as he was unable to give consent. The video of the incident has gone viral and received nationwide coverage.

The incident was the result of a high-speed chase, where the suspect is spotted swerving into a semi-truck head-on before it explodes into a ball of flames. The suspect was killed, and the semi driver was left with burns, Jalopnik reported.

The truck driver was Wubbels’s patient and was not a suspect in the police investigation. The driver of that semi-truck—Wubbels’s patient—was identified as William Gray of Rigby, Idaho, who is also a reserve police officer for the Rigby Police Department, Fox13 reported.

Rigby Police Chief Sam Tower released a statement praising Wubbels for protecting “Officer Gray’s rights as a patient and victim. Protecting the rights of others is truly a heroic act.”

“It is important to remember that Officer Gray is the victim in this horrible event, and that at no time was he under any suspicion of wrongdoing,” the statement reads.

The driver of the car that exploded was identified as 26-year-old Marco Torres of Brigham City. He was pronounced dead at the scene of the crash, according to Fox13.

Wubbels was later released without charge. The incident was captured on another officer’s body camera that was released last week. “I’m just trying to do what I’m supposed to do. That’s all,” Wubbels tells the officers. Later, Salt Lake Police detective Jeff Payne tells her: “We’re done here. We’re done. We’re done.”

Payne then slaps cuffs on her and pushes her toward a police car.

“I was alarmed by what I saw in the video with our officer and Ms. (Wubbels),” Salt Lake City police Chief Mike Brown said in a news conference, according to a video feed of the event. “I am sad at the rift this has caused between law enforcement and the nurses we work so closely with.”

“On the face of the evidence, there is concern that is raised about this officer’s conduct,” Gill said. “But the whole point of an investigation is to gather the information about this situation.”