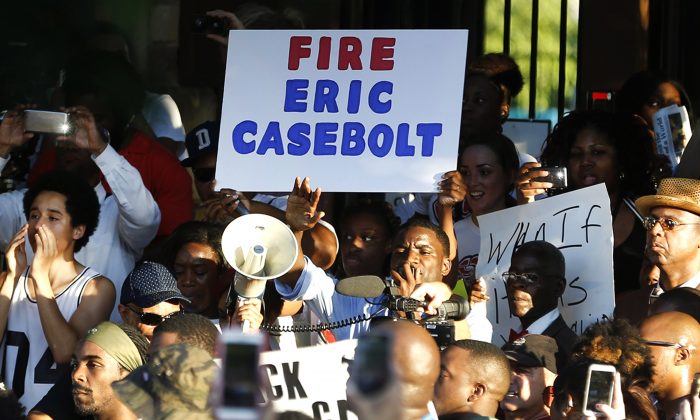 Demonstrators gather near a community pool Monday, June 8, 2015, during a protest in response to an incident at the pool involving McKinney police officers in McKinney, Texas. (AP/Ron Jenkins)
US

Video of Officer Outside Pool Party Sparks Protests in Texas

McKINNEY, Texas—A black teenager in a swimsuit repeatedly cried out, “Call my momma!” as a white police officer pinned her to the ground, only moments after drawing his handgun on other black teens.

“On your face!” the officer yelled at the girl, amid screaming from a crowd of onlookers.

The officer’s actions raised tensions and led to protests Monday in this Dallas suburb, where some community activists accused him of racism while others urged calm until the facts are investigated.

Jahi Adisa Bakari, the father of another teenage girl at the party, said he would press for the officer to be fired, saying he “was out of control.”

But Benét Embry, a black local radio personality who witnessed the incident, said it was “not another Ferguson” or “another Baltimore,” referring to other police encounters that have left suspects dead and fueled a nationwide “Black Lives Matter” movement.

“This was a teenage party that got out of hand,” Embry said.

Police said some of the young people did not live in the area and did not have permission to be at the pool in McKinney, an affluent, predominantly white city.

According to neighbors, Embry said, a woman who lives in the community reserved the pool for a party. The homeowners’ association limits the number of guests each homeowner may have at the pool to two. But about 130 people, mostly kids, showed up for the woman’s party, he said.

At one point, several kids began jumping over the fence to get into the pool area and were causing a disturbance, Embry said, and a couple of fights broke out.

While he did not agree with the officer’s profanity or belligerence, Embry said, police were right to respond.

“That’s what they are supposed to do — protect us,” he said. “I don’t know any other way he could have taken her down or established order.”

The officer has been placed on administrative leave. In a statement, the police department said the video “raised concerns that are being investigated.”

Prior to that, he served almost two years as a state trooper, according to records from the Texas Commission on Law Enforcement.

Casebolt took eight hours of cultural diversity training at Collin County Community College in February 2009. He has also taken courses in racial profiling and use of force.

As police broke up the crowd, the officer pulled the bikini-clad girl to the ground, then used his knees to pin her down. He also pointed his gun at other teens and cursed.

The girl claimed the officer told her to walk away but forced her down after “he thought we were saying rude stuff to him,” according to an interview she gave to television station KDFW.

“He grabbed me, twisted my arm on my back and shoved me in the grass and started pulling the back of my braids,” Dajerria Becton, 15, told the station. “I was telling him to get off me because my back was hurting bad.”

“I understand how he was feeling, everybody surrounding him,” she said. “I don’t think he should have pulled a gun out on 15-year-old kids.”

Brandon Brooks, the teen who recorded the video, told KDFW that tensions rose after a white woman and a black teenager at the party had an altercation. He said the white woman told the teen “to go back to Section 8 housing,” a reference to federal housing aid given to low-income families.

The comment holds extra significance in McKinney, which has been the target of lawsuits accusing its housing authority of racially segregating Section 8 housing. One long-running lawsuit was settled with a consent decree in 2012 that aimed to open up the west side to subsidized housing.

Brooks said that the officer was “out of line” and that he felt compelled to keep filming when Casebolt pulled out his gun.

“At that point, my heart did drop and I was scared that someone was going to get shot and possibly killed,” he said.

“We really need to come together as a community,” the mayor said.

On Monday night, hundreds of demonstrators marched from an elementary school to the pool in protest of Casebolt’s actions. Some carried signs that said, “My skin color is not a crime,” and, “Fire Eric Casebolt.”

Separately, a smaller group of demonstrators gathered outside of the McKinney Police Department.

Nikki Perez, a black resident of McKinney, attended a City Council meeting Monday to express her concern over the officer’s actions.

“I don’t excuse the behavior of those teenagers, but if I call 911, then I wouldn’t want that cop to respond,” Perez said. “He blew his credibility when he opened his mouth and started cursing at the kids.”

Robert Taylor, a criminology professor at the University of Texas at Dallas who has done studies for the McKinney Police Department, said both the officer and the teens at the pool party acted inappropriately.

The teens were not following police orders, he said, but the officer’s decision to pull out his gun did not help.

“That’s not the way we’re trained,” he said. “We’re trained in policing to de-escalate problem encounters like this. … Obviously, that officer lost his cool. No doubt about it.”

Most people were released, except for one man arrested for interference with the duties of a police officer and evading arrest, police said.