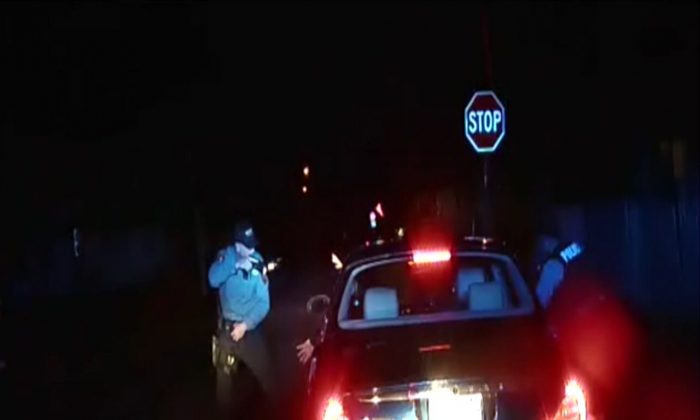 In this frame grab from an officer's dashboard camera taken Dec. 30, 2014, and provided by the Bridgeton, N.J. Police Department, police officers Braheme Days and Roger Worley stand near a car they pulled over for running a stop sign in Bridgeton. One of the officers warned his partner that he could see a gun in the glove compartment. The nearly two-minute standoff resulted in the death of Jerame Reid, one of two men in the car. (AP Photo/Bridgeton Police Department)
New York

BRIDGETON, N.J.—A police video of officers confronting and then fatally shooting a black man in southern New Jersey has raised questions and stirred anger over another death at the hands of police.

The video of the Dec. 30 killing of Jerame Reid in Bridgeton, a struggling, mostly minority city of 25,000 people just south of Philadelphia, was released this week.

The nearly two-minute deadly standoff came after the killings of black men in New York and Ferguson, Missouri, triggered months of turbulent protests, violence and calls for a re-examination of police use of force.

Conrad Benedetto, a Philadelphia lawyer, said he has been hired by Reid’s wife, Lawanda, to investigate. He said in a statement the footage “raises serious questions as to the legality and/or reasonableness of the officers’ actions that night” because Reid was shot as he raised his hands.

With the dashboard camera in their cruiser rolling, police pulled a Jaguar over for running a stop sign on a dark night. But things suddenly turned tense when one of the officers warned his partner that he could see a gun in the glove compartment.

Screaming over and over “Don’t you f—ing move!” and “Show me your hands!” at the man in the passenger seat, the officer reached into the car and appeared to remove a silver handgun.

Then, the passenger, despite being warned repeatedly not to move, stepped out of the Jaguar, his hands raised about shoulder level.

The officers opened fire, killing him.

Reid and the man driving the car were black. The Bridgeton officer who spotted the gun, Braheme Days, is black; his partner, Roger Worley, is white. Both officers have been placed on leave while prosecutors investigate.

“The video speaks for itself that at no point was Jerame Reid a threat and he possessed no weapon on his person,” Walter Hudson, chairman and founder of the civil rights group the National Awareness Alliance, said Wednesday. “He complied with the officer and the officer shot him.”

Reid, 36, spent about 13 years in prison for shooting at three state troopers when he was a teenager. And Days knew who he was; Days was among the arresting officers last year when Reid was charged with several crimes, including drug possession and obstruction.

In Bridgeton, where two-thirds of the residents are black or Hispanic, the killing has stirred small protests over the past couple of weeks, including a demonstration on Wednesday, a day after the video was made public at the request of two newspapers under the state’s open records law.

The Cumberland County prosecutor’s office previously said a gun was seized during the stop but would not comment further on the investigation. Bridgeton police would not answer any questions about the video and said they opposed its release as neither “compassionate or professional.”

County prosecutor Jennifer Webb-McRae has disqualified herself from the case because she knows Days. But Lawanda Reid’s lawyer and activists are demanding the state attorney general’s office take over the investigation, something it said it will not do.

In the video, the mood changes in a flash when Days tells his partner about the gun and starts yelling, “Show me your hands!” The driver, Leroy Tutt, raises his hands immediately. Reid does not at first.

Days, still yelling, reaches into the car and appears to remove a gun.

Days tells his partner, “He’s reaching for something.”

Faintly on the video, Reid can be heard telling the officer, “I ain’t doing nothing. I’m not reaching for nothing, bro. I ain’t got no reason to reach for nothing.”

Then one of the men in the car tells the officer, “I’m getting out and getting on the ground.”

The officer again orders Reid not to move. Seconds later, Reid emerges from the car, raising his hands, which appear to be empty. Both officers fire immediately, shooting at least six rounds.

Bystanders start yelling at the officers, and other emergency vehicles arrive.

The South Jersey Times reported this week that residents had filed seven municipal court complaints against Days since 2013 and two against Worley in that span for alleged abuses of power; all the complaints were dismissed.