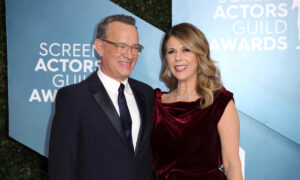 A video of a security guard helping a blind man cross the street in Minnesota has gone viral.

The video, shared on Facebook by Tina Mack, shows a security guard coming from the Aveda Institute in Minneapolis to help an older man, Jerry Quarnstrom, who is blind and hearing-impaired.

The pair crosses Central Avenue as Mack films from a hair salon where she was to get her hair done.

Patty Liepold, who works at the institute, told CBS that it’s become a tradition to help Quarnstrom cross the street.

“It’s kind of like an inherited thing, anyone that comes works here knows that you may have to walk Jerry across the street,” she said. “It’s just part of it. It’s the right thing to do.”

Employees from Chuck and Don’s and Lund’s, near the institute, also regularly help Quarnstrom around.

Quarnstrom told the broadcaster that he appreciates the help.

“Just thank you guys for helping me,” he said. “I do need your help, so thank you so much.”

The video has been viewed more than 850,000 times, with over a thousand people leaving comments.

“What a great bunch and loving people to watch out for him,” said one user.

“There are many just not reported wonderful for him and his helpers,” added another.

“There are more Good People than Bad People. They just don’t make the Front Page,” added another.

And one user shared a touching story from where she worked.

“When I worked at School of Public Health (in the old Texaco bldg,) Tulane Police would see my mom (blind as well) getting of the bus and one of the guys would walk her to the med school then another would walk her past the hospital,” Clarissa Koederitz wrote.

“Finally, TU policeman (Thomas Porre) would meet her and bring her into SPHTM and up to the office. People do have beautiful hearts and souls. God Bless Thomas wherever you are now.”