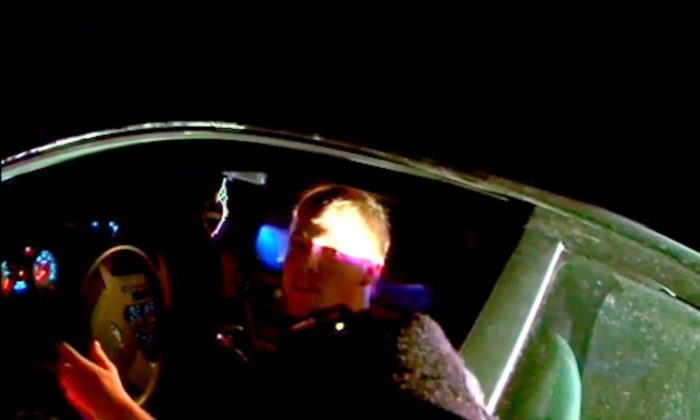 This Feb. 28, 2015 photo, provided by Guilford family attorney Cynthia Heenan, shows an image from Sgt. Jonathan Frost's body cam as he orders Deven Guilford, 17, out of his vehicle in Roxand Township, Mich. The video starts with the uncooperative teen questioning why he was pulled over for flashing his high beams at Frost and ends with a dizzying tumble of images and the sound of gunshots that killed Guilford. A Michigan court will now decide whos to blame in the latest deadly police shooting that began with a simple traffic stop and no hint of violence. (Guilford family attorney Cynthia Heenan/Michigan State Police via AP)
US

DETROIT (AP) — The video starts with an uncooperative teen questioning why he was pulled over for flashing his high beams at a police officer. It ends with a dizzying tumble of images and the sound of gunshots that killed the young driver.

Now a Michigan court will have to sort out who’s to blame in a deadly police shooting that began with a simple traffic stop and no hint of violence.

Deven Guilford, 17, had just finished playing basketball at his church and was driving to see his girlfriend on the evening of Feb. 28 when he was stopped by a sheriff’s deputy in Roxand Township, a small community west of Lansing.

At least two drivers were pulled over that night by Sgt. Jonathan Frost for flashing high beams at the officer’s SUV. The officer and the teen driver passed each other going opposite directions on a highway, according to a lawsuit filed Wednesday in federal court by Guilford’s family.

The younger driver asked why he was stopped and insisted the officer’s high beams were on. Frost said the SUV was new and the lights were brighter than on other vehicles. He repeatedly demanded the teen show his driver’s license and vehicle registration.

The teen, who told Frost he was using his cellphone to record the interaction, said he had his license but that the deputy didn’t “have to see it.”

Sitting behind the steering wheel, Guilford also said: “You had your brights on, sir. I’m not lying to you. I was just doing that to be polite. I didn’t want you to flash someone and have someone go off the road and crash.”

The officer responded, “Do you realize that if you had complied with this traffic stop, it would have gone a whole different way for you?”

The rest of the encounter unfolded quickly.

Guilford held up his cellphone, and the officer ordered him to get out of the car. Once the driver was outside the vehicle, the officer told him to get on the ground by the roadside. The teen, wearing only a T-shirt and pants, first dropped to his knees. After more commands from the officer, he laid face-down on the pavement.

He refused Frost’s orders to drop the phone, and the officer kicked it from his hand.

After telling the teen to put his hands behind his back, the officer shot him with a Taser, but the stun gun either did not work or did not disable Guilford. The sergeant’s body cam recorded the teen getting up and coming toward Frost, followed by the sound of gunshots. Guilford’s phone also recorded audio of the shots, seven in all.

Frost later wrote in an investigative report that the teen knocked him to the snowy ground and repeatedly punched him in the head.

“I felt as though I was going to lose consciousness and made the decision to shoot my attacker,” Frost wrote in the report supplied to The Associated Press by Guilford family attorney Cynthia Heenan.

The officer said he feared that if he were knocked out, the teen “would take my gun and shoot me with it.”

Photos taken by the sheriff’s department immediately after the confrontation show Frost bleeding from cuts to his face while being treated by paramedics.

Unlike some other police shootings, race was not a factor in this confrontation. Both the teen and the officer were white.

But the way the traffic stop quickly spiraled into a more serious confrontation called to mind the video of Sandra Bland, a black Illinois woman who was pulled over in July near Houston for failing to signal. She was arrested after arguing with the white officer and was later found dead in her jail cell in what authorities say was a suicide.

In Michigan, Sheriff Tom Reich said he stood by Frost, the findings of the prosecutor and an internal review that concluded he acted reasonably and did not violate department rules.

“The last thing that Sgt. Frost or any law enforcement officer wants to do is to be put into a position where he is compelled to use his firearm to defend his life,” Reich said in a statement Friday. “But when that occurs, it is understandable and reasonable” that the decision “will be challenged and scrutinized by many sources.”

In their wrongful-death lawsuit, Guilford’s family says the teen’s civil rights were violated and that Frost used excessive force.

State law prohibits glaring headlights that may distract an oncoming driver, not the flashing of high beams, according to the lawsuit.

“Deven didn’t think he should have been pulled over in the first place,” Heenan said Friday. “He thought he was being a good guy and a good driver in alerting somebody that their lights were on.”

The family is seeking unspecified damages for Guilford’s pain and suffering prior to his death, plus burial expenses and loss of financial support to his family, among other things.

“We are outraged at the huge miscarriage of justice done to our son,” Guilford’s family said in a statement. Relatives spent months “trying to figure out how our son, who had never even been in a serious fight, was shot seven times coming from basketball at church and going to his girlfriend’s to watch movies.”

The AP left messages Friday with Eaton County Controller John Fuentes and a law firm representing the county and Frost. The officer’s home telephone number could not be found.