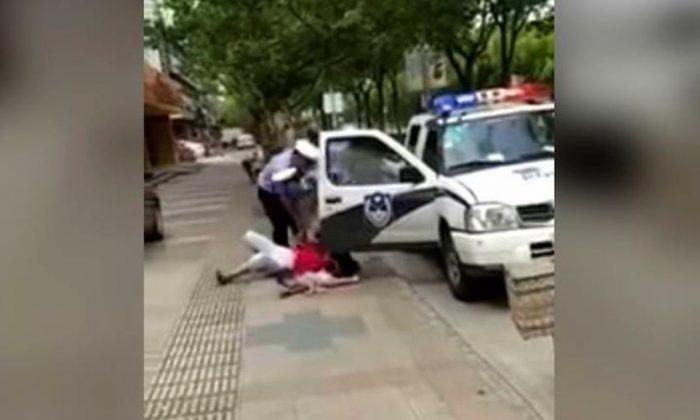 A video showing a Chinese police officer slamming a woman holding a child to the ground has incensed social media users in the world’s most populous country.

A video, taken by a bystander, shows a woman in Shanghai arguing with an officer over a parking fine. After a heated exchange, the officer suddenly slams the woman to the pavement, while she’s holding her child.

The infant can be seen flying to the pavement. Onlookers rush to the scene and try to help the woman and her child.

On the video, captured Sept. 1, Weibo users condemned the physical force used against the child.

One Weibo user from Nanjing said, “What are these police doing? They should be protecting and serving the people. Even if there are some disputes, it shouldn’t go as far as throwing a child on the ground.”

Another person wrote on Weibo. “After watching the video, I thought the problem was at most an individual issue. But after reading the official Shanghai police report, my opinion completely changed. I feel this is not a problem with any single person, but a very serious political issue. Those two officers have brought shame on entire country’s police forces. If they are not punished, how could the true police of the people tolerate it?”

The official report says that while the police officer was attempting to handle a parking violation, he was obstructed by the disobedient and violent owner. In this Chinese user’s blog, the police are criticized for using excessive and unnecessary force to resolve the situation properly.

In recent years, Chinese police officers have been criticized for committing human rights abuses. In one dramatic example, Xu Chensheng, a practitioner of Falun Gong—a type of spiritual practice that includes slow-moving, meditative exercises that’s been severely persecuted by the Chinese Communist Party since 1999—died in police custody after just 12 hours.

Over the past 18 years, over 4,000 cases have been documented of illegally detained Falun Gong practitioners dying while in the hands of state security. The number of cases that haven’t been documented is much higher.

“The Chinese government seems intent on eliminating civil society through a combination of new legislation restricting the funding and operations of NGOs, and the criminalization of human rights activities as a so-called threat to national security,” Frances Eve, a researcher at CHRD, told The Guardian several months ago. “What stands out is the almost institutionalized use of torture to force defenders to confess that their legitimate and peaceful human rights work is somehow a ‘crime’,” Eve added.