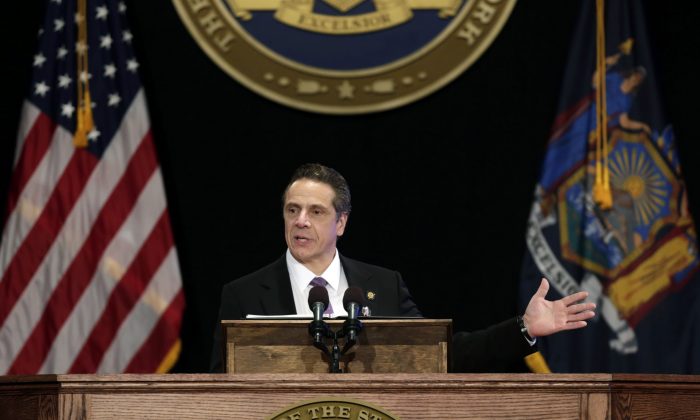 New York Gov. Andrew Cuomo got interrupted by “heckler,” but it turned out to be Assemblyman Charles Barron (D-Brooklyn).

“This is rhetoric,” Barron said, getting out of his seat. “Nonsense.”

The New York Daily News got his comments, but several videos were uploaded of the incident.

Barron accused the governor of shortchanging state schools by $4 billion.

"Just because you yell, doesn't mean you're right!" says Cuomo, who is himself yelling, after Charles Barron heckles him

Cuomo was trying to finish his sentence, but had difficulty due to Barron’s outburst.

Cuomo said, “Everybody sees you and everybody heard you. Have a seat, assemblyman.”

“Eeeeeverybody heard you, Assemblyman,” he later told him.

Barron kept going on, and some people in the audience started to boo him and told him to stop.

The Daily News reported that he was escorted out of the hall by Assembly Sergeant-at-Arms Wayne Jackson. Assembly Majority Leader Joseph Morelle.

Barron issued a statement, saying, “I am sick of the hypocrisy and neglect displayed by the governor towards our most needy. I refuse to sit and watch him make claims and statements that are backed by insufficient actions. Governor Cuomo needs to take a stand and put the money where his mouth is.”

Barron, who served the New York City Council for more than a decade, was elected to the State Assembly in 2014.

Things got heated during Gov. Andrew Cuomo’s State of the State Speech yesterday when Assemblyman Charles Barron stood up and began yelling over the governor.Barron was ultimately escorted out, but who do you think won the exchange?—> http://cnycentral.com/news/local/watch-gov-cuomo-interrupted-by-heckling-assemblyman-during-speech

Posted by CNYcentral.com on Thursday, January 14, 2016

“I planned this,” Barron said, per Gothamist. “Remember last year? I sat through the whole thing and I almost died in my seat. I don’t like the idea that they show these films [demonstrating progress, at the beginning of the address]. This is a hand-picked audience.”

He told reporters that Cuomo ignores the needs of poor New Yorkers while painting a “flowery” vision of the state.

“State of what state?” he said. “That’s not the state of Harlem.”