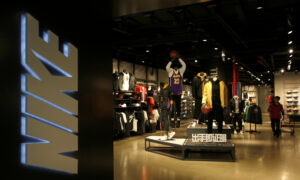 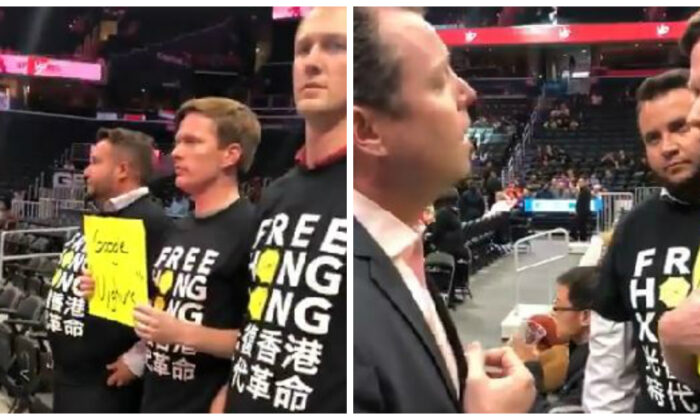 Security at a basketball game in Washington on Oct. 9 were filmed taking a fan’s “Google Uyghurs” sign, referring to the minority ethnic group held by the millions in labor camps in China.

Security guards initially confiscated “Free Hong Kong” signs held by Jon Schweppe and his friends, warning them that if they displayed additional signs they’d be removed.

Schweppe and two friends were wearing shirts with the words “Free Hong Kong” on them. The shirts also included Chinese letters saying the same.

Security initially left the “Google Uyghurs” sign alone but eventually a guard came by to take it as the National Anthem played in the background.

“No political signs,” a security worker told one of Schweppe’s friends.

The man holding the sign wondered what about the sign was political. “The Uyghurs are a Chinese population,” he told the worker.

“OK, so we’re not allowing any political signs,” the worker said.

The man holding the sign tried to engage the man about who Uyghurs are. The security worker said he didn’t want to get into “political discussions.”

“They’re a Muslim minority population in China that’s been put in concentration camps by the Chinese government,” the man holding the sign said.

“That’s a political statement,” the worker said. Another came over and said, “That sign has to go.”

Search traffic for “Uyghurs” spiked late Wednesday as people searched for the word on Google. Randall Schriver, who leads Asia policy at the U.S. Defense Department, said at a briefing earlier this year that analysts believe 1 to 3 million Uyghurs are being held in “concentration camps” by the Chinese government.

People of #HongKong, America hears you! America sees you! We love you and we will stand with you! Stay strong! #FreeHongKong #RevolutionOfOurTimes

Schweppe and his friends were at Capital One Arena in Washington to watch the Washington Wizards take on a Chinese team in an exhibition game.

Other fans were also confronted over signs relating to Hong Kong they brought into the arena.

Patrick Hedger, a research fellow at the Competitive Enterprise Institute, shared footage he said showed him getting kicked out over a “Free Hong Kong” sign.

“People of #HongKong, America hears you! America sees you! We love you and we will stand with you! Stay strong!” he wrote in another missive.

The NBA has been embroiled in a situation with China after Houston Rockets General Manager Daryl Morey expressed his support for protesters in Hong Kong.

In retaliation, a number of Chinese companies have suspended ties with the NBA.