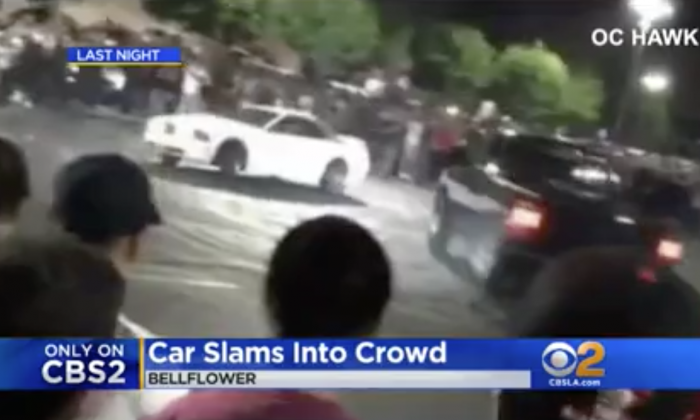 (Screenshot Via CBS)
Crime and Incidents

The driver of a Mustang who slammed into a crowd of spectators at an illegal street racing show is still at large.

Los Angeles police authorities are asking the public to help with any information that can lead them to the driver.

A cellphone video shows a driver of a Mustang lost control before slamming into the dense crowd at a Kmart parking lot in Bellflower, CBS reported.

“It was horrible,” Raquel Bermejo told CBS after watching the video. Bermejo lives across the street and heard the commotion, but did not  actually witness the crash.

Hundreds of people were at the parking lot around 11 p.m. on Saturday, Aug. 19 to watch the illegal car show. Multiple drivers were performing donuts and burnouts, the vehicles’ screeching sounds filled the area and tire marks were seen everywhere.

One shopper Diane Knieling, told CBS, “Obviously there’s people who don’t follow the rules and really have no respect for other peoples property.”

Another shopper said the incident made her feel less secure.

“It is frightening because you never know where you are going to be safe,” said Doris Caston.

But despite the graphic video, the LA County Sheriff’s Department said it did not receive one call relating to the incident. While no major injuries were reported, people were still injured after the car crashed into them.

Robert Bodner from Norwalk told CBS he had not much sympathy for those who got hurt.

“You’re gonna stand that close to where they’re doing that no barriers no safety? Then you get what you get,” Bodner said.

In the video, the Mustang is seen clearly knocking people down. But there appeared to have been a metal cart in front of the spectators, which may have been a lifesaver.

Later in the video as the Mustang driver backed up, some people in the crowd can be seen getting angry and throwing things at the vehicle. Some also kicked the car but witnesses said the man drove away and the whole crowd scattered.

A day later on Sunday, CBS spoke to three people who were hit by the Mustang. Out of the three people interviewed, one had a knot on his head, while the other two were sore.

Daniel Benitez was filming the crash when the Mustang slammed directly into him and friends at his side.

“It happened really fast,” Benitez said, “I hit the floor and I got instantly up.”

Benitez and his friends were sitting on the metal cart when the car crashed into them. It may have saved them from more fatal injuries.

His friend Kristopher Garcia, said he blacked out when the car hit hm. Roman Mendoza also fell and they both remain sore.

“It was terrifying,” Mendoza said, “I was shaking. My legs were shaking, like crazy.”

The group of men said one of their other friends went to the hospital with a broken arm but they didn’t see anyone else who seemed seriously injured.