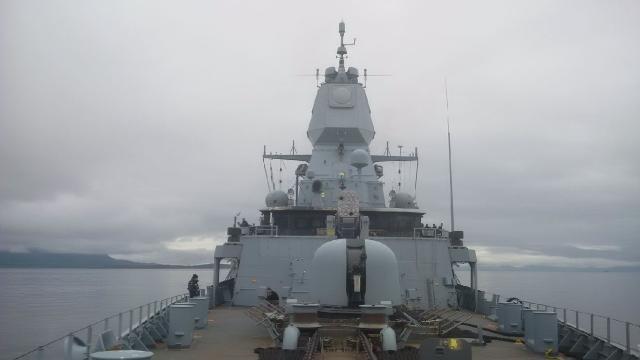 A missile reportedly exploded on a German warship, causing serious damage but no major injuries.

Footage of the explosion and fire were posted online by the Germany Navy, showing the missile exploding right after it launched. The explosion sent down sparks and other burning debris onto the ship.

The incident took place near the Arctic Circle off the coast of Norway part of a training event. The FGS Sachsen was operating along with the FGS Lubeck, the German navy said in a news release, according to a translation.

“We were standing in front of a glistening and glowing hot wall of fire,” German Capt. Thomas Hacken, who was on the bridge, said in the news release.

Photos were taken of the ship after the blast, showing that it suffered burns. Two German soldiers suffered minor injuries.

It’s not clear why the missile misfired, as it had been checked and was in “perfect condition,” the German navy said, according to the release. The same type of missile had been launched before the mishap, officials said.

Popular Mechanics reported that the ship’s deck and bridge were damaged.

Both frigates returned back to Wilhelmshaven, Germany, on the North Sea, on Tuesday.

“We have to practice realistically, so that we are ready for action in case of emergency, also for the national and alliance defense,” said Vice Adm. Andreas Krause, who is a Navy inspector. Krause said, “our crews are highly motivated and ready to do their best.”

Earlier this month, the U.S. military held preliminary discussions about moving a powerful missile defense system to Germany to boost European defenses, according to two sources familiar with the issue, a move that experts said could trigger fresh tensions with Moscow, Reuters reported. The tentative proposal to send the Terminal High Altitude Area Defense (THAAD) system to Europe predates U.S. President Donald Trump’s decision to withdraw from the 2015 Iran nuclear accord, and comes amid a broader push to strengthen Europe’s air and missile defenses.

U.S. European Command has been pushing for a THAAD system in Europe for years, but the U.S. withdrawal from the Iran nuclear accord has added urgency to the issue, said Riki Ellison, head of the non-profit Missile Defense Advocacy Alliance.