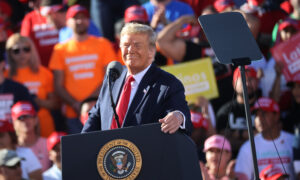 Video: Melania Trump Has Twitter Advice for Her Husband

Fox host Sean Hannity interviewed Melania and Donald Trump while they were on the campaign trail.

In the video, uploaded on April 4, Hannity asked Melania if she had any advice for her husband, since “guys get their best advice from their wives.”

If he could only listen.
— Melania Trump, on her husband, Donald Trump

The 45-year-old former model and mother told Hannity that she was concerned about Donald’s behavior on Twitter.

“The retweets sometimes get him in trouble,” says Melania, “so I say stay away from retweets.”

“@WhiteGenocideTM: @realDonaldTrump Poor Jeb. I could’ve sworn I saw him outside Trump Tower the other day! pic.twitter.com/e5uLRubqla“

In another instance, Trump apologized to Iowans after “a young intern” retweeted an insult, implying Iowans had cognitive issues. The tweet has since been deleted.

“If he could only listen,” joked Melania in the interview, which was recorded while the couple were in Wisconsin.

“@ilduce2016: “It is better to live one day as a lion than 100 years as a sheep.” – @realDonaldTrump #MakeAmericaGreatAgain“

Earlier in the video, Hannity asked Melania about the effect negative campaigning has on her. Numerous instances of which have been troubling the Republican primary election.

“When they run a super PAC ad attacking you, is that painful?” queries Hannity.

“I have a tough skin.” Melanie replies, “I think it’s not fair that they are attacking family, wife or children.”