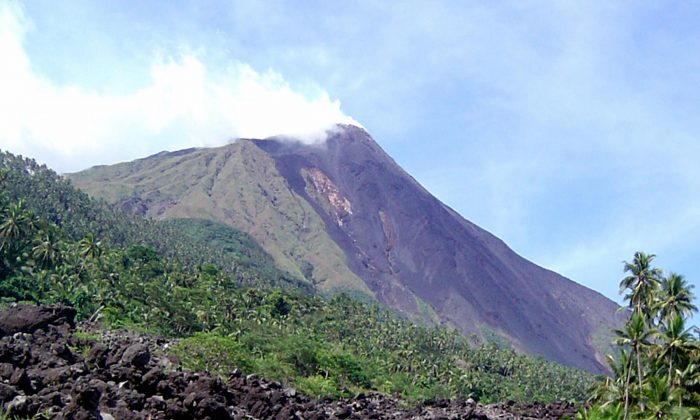 JAKARTA, Indonesia—An eruption of one of Indonesia’s most active volcanoes sent lava and searing gas clouds out the crater and made villagers leave the slopes, a volcanology official said on Tuesday, Feb. 5.

Authorities were still trying to evacuate nearly 600 residents living along the slopes of Mount Karangetang, said Yudia Tatipang, head of the Karangetang volcano observation post. There were no immediate reports of injuries or serious damage.

He said the 1,784-meter (5,853-foot) volcano located on Siau island of North Sulawesi province started spitting clouds of gas and lava on Sunday.

Late on Monday, hot ash tumbled down its slopes up to 300 meters (980 feet), triggering panic among villagers as falling ash and sulfur blanketed several villages around its slopes.

Tatipang said that scientists kept the alert level of the volcano at the second-highest level but people should stay out of a 3-kilometer (1.8-mile) danger zone around the crater.

#Karangetang volcano is located on Siau-island off the mainland of Northern-Sulawesi in Indonesia. It is a Stratovolcano, and one of Indonesia’s most active volcanoes, with more than 40 eruptions recorded since 1675, according to Global Volcanism Program. pic.twitter.com/YOvyDY5A8d

The Karangetang mountain is one of about 129 active volcanoes in Indonesia. Its last big eruption was in 2011, killing four people.

Indonesia lies on the Pacific “Ring of Fire,” an arc of volcanos and fault lines encircling the Pacific Basin, and is prone to volcanic and seismic activity.