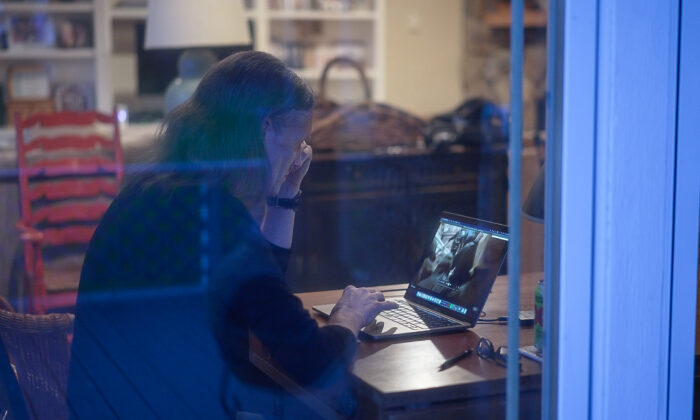 DALLAS—After a 30-hour stint investigating the minutest details of Jan. 6, 2021, video evidence, Gary McBride had to take a break for some sleep.

McBride often fights off sleep when he gets engrossed in his detailed analysis of thousands of hours of video footage from the unrest at the U.S. Capitol. To say he’s focused would be a vast understatement. Passionate, even obsessed, would be more accurate terms.

He’s on a journey to unlock the secrets of what happened on Jan. 6, 2021. The past 18 months have come at a steep price for the former oil and gas industry executive, but he’s driven to continue.

McBride has obtained numerous video clips from the Jan. 6, 2021, Capitol breach, which he analyzes in depth. McBride’s findings played a significant role in the new Epoch TV documentary, “The Real Story of Jan. 6,” now streaming on the Epoch TV website.

He searches each frame of video footage for unusual things—people who seem out of place or others who seem to be coordinating using hand signals. It’s painstaking work.

“When I find something new, then I’ll be out for 24, 30, 36 hours straight, and I won’t stop until I pass out right there at my table or on the couch or something,” McBride said. “I won’t stop. I just get that adrenaline going, and I just keep digging and looking for video.”

Many of McBride’s discoveries were found on video that has long been in the public domain, either posted on social media or on several online video banks with Jan. 6, 2021, footage.

“It’s the same videos, you know, there’s nothing really different,” he said. “When something comes out that’s new, of course, I’m going to watch it real good. It’s there if people would just look at it. It’s all there. And the video is what’s important to have because it’s what tells the truth.”

McBride made significant discoveries in his countless work hours at his home office, located northwest of Dallas. None was more important than a police officer’s assault on an unconscious Rosanne Boyland at the mouth of the Lower West Terrace tunnel entrance to the Capitol.

It was a detail that caught his eye while watching a cable television newscast. They were reporting on the U.S. Justice Department’s release of bodycam video from police at the front of the tunnel.

While the host narrated how the video showed a police officer being dragged out into a hostile crowd, McBride noticed an unconscious woman being struck by a police officer with a stick in the lower right corner of the screen.

After downloading the video and examining it frame by frame, he discovered that the motionless woman being beaten was Rosanne Boyland, 34, of Kennesaw, Georgia. The video showed an officer from the D.C. Metropolitan Police Department repeatedly striking the seemingly lifeless woman.

McBride searched for other videos from different angles and eventually saw the officer’s badge number on her helmet. That led him to identify the officer as Lila Morris, one of the officers honored at the 2021 Super Bowl weeks after Jan. 6, 2021. That didn’t sit well with McBride, so he filed a police-brutality complaint against Morris with the Metropolitan Police Department in September 2021.

After about two months, the department responded that its investigation of Morris’s use of force found it to be “objectively reasonable.”

Metropolitan Police Department spokeswoman Alaina Gertz told The Epoch Times in an emailed statement in May: “The matter involving Officer Morris was previously brought to our attention and reviewed thoroughly. This review included her body-worn camera footage and did not substantiate the allegations.”

Bodycam footage from Morris and other officers at the front of the tunnel shows that she used a stick to strike protester Luke Coffee in the right elbow. She swung at Coffee again but missed. She then turned her attention to Boyland, hitting her in the ribs once and the face and head twice, the footage shows.

Boyland lay on the concrete outside the tunnel as bystanders begged police to stop pushing people on top of her. Once the people in the pile got up, Boyland wasn’t breathing. Bodycam video captures the frantic pleas for help. No police officers made a move to assist Boyland, so protesters dragged her away from the tunnel to begin CPR.

Boyland was pronounced dead at 6:15 p.m. after SWAT team members just inside the Capitol performed CPR and used a defibrillator to try to restart her heart. The Washington medical examiner said she died of amphetamine intoxication from a prescription drug she took for attention deficit hyperactivity disorder (ADHD). A forensic pathologist hired by the Boyland family disagreed and listed the cause of death as manual asphyxia.

McBride said he’s glad the mainstream media framed the story of that bodycam video the way they did since it led him to the discoveries about Boyland.

“It showed me that they don’t care what happened, or they didn’t even watch the video, because they just played the video and let us watch Lila beat Rosanne, laying there not doing anything,” McBride said.

McBride has shared some of his findings with attorneys representing the Jan. 6, 2021, defendants.

“I let them know that I’m going to help them,” he said. “But whatever I find—good or bad—I’m giving it to the attorney. I’m not just going to give them the good stuff. It’s going to be both. … They were all fine with that. They just wanted somebody to help them, so that’s what I did.”

McBride’s singular focus on Jan. 6, 2021, has come at a steep price. He isn’t on anyone’s payroll and relies on GiveSendGo donations that have barely kept his head above water. It also led to the breakup of his marriage and the looming specter of home foreclosure.

“I’m adamant about making sure this gets out,” he said. “Because I don’t care what I lose. I’ve lost it all. You can’t take anything else away from me that’s going to hurt me. But we just can’t stop. I can’t stop.

“You know, I’ve worked until 4:30 in the morning, continuously still doing the same thing I’ve been doing since January 15 [2021],” McBride said. “I won’t stop until everybody’s case has been dropped and everybody’s out of jail because that’s what should happen.”

McBride’s hair is a visible reminder of his solidarity with Jan. 6, 2021, defendants in pretrial detention. Some have been behind bars for 18 months, awaiting their day in court. McBride says he won’t cut his hair until the “J6ers” are all released on bond.

Through late nights, bleary eyes, and countless marathon projects, McBride said he has realized that the work is never done.

“Every time I find stuff that I don’t think I’m going to find anything else, that’s not the case. I always do,” he said. “There’s no telling how much is out there, and you just have to keep digging and not give up and not stop.”

The strain on McBride’s face is evident as he describes his journey. It can be challenging for him to talk about.

“I’m not going to stop because the more I do this, you know it’s …” he said, unable to continue, his voice seizing up with emotion. “I got choked up. Oh, man.”