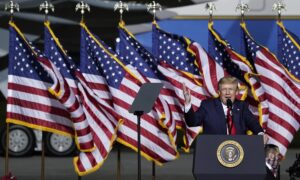 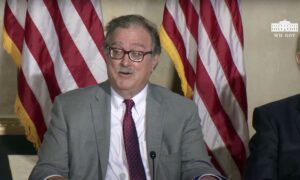 Scroll down for video
By Jack Phillips
Print

Hurricane Florence triggered the flooding of the Pungo River in Belhaven, North Carolina, which caused water levels to get to the first floor of a house.

According to the National Weather Service, the Pungo River got well above major flood stage overnight. Amy Johnson, who captured the video footage, told Time magazine that the river inundated the first floor of her home.

In New Bern, storm surge and the flooding of the Neuse River inundated most of the town. The city tweeted at 2 a.m. that more than 150 people were in need of a water rescue. “Currently—150 awaiting rescue in New Bern. We have 2 out-of-state FEMA teams here for swift water rescue. More are on the way to help us. WE ARE COMING TO GET YOU. You may need to move up to the second story, or to your attic, but WE ARE COMING TO GET YOU. #FlorenceNC,” the city wrote on Twitter.

In its 11 a.m. update on Sept. 14, the National Hurricane Center (NHC) said that Florence is still a Category 1 storm with 80 mph winds. The storm is moving slowly at 3 mph and is located southwest of Wilmington, North Carolina.

“Maximum sustained winds are near 80 mph (130 km/h) with higher gusts. Gradual weakening is forecast later today and tonight. Significant weakening is expected over the weekend and into early next week while Florence moves farther inland,” according to the agency.

But the NHC warned against storm surge. It said Cape Fear has between 7 feet and 11 feet of storm surge, and it’s locally higher around the Neuse, Pamlico, Pungo, and Bay rivers.

“The deepest water will occur along the immediate coast in areas of onshore winds, where the surge will be accompanied by large and destructive waves. Surge-related flooding can vary greatly over short distances. For information specific to your area, please see products issued by your local National Weather Service forecast office,” the agency said.

The storm is still slated to produce 20 to 25 inches of rain along the coasts of North and South Carolina, the agency said.