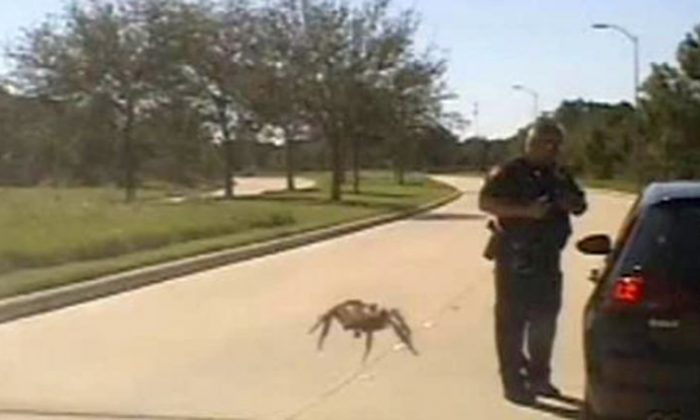 Police dashcam footage captured the moment a spider crawled across an officer’s windshield at the right moment as he was stopping a motorist, on Oct. 10, 2018. (Fulshear Police)
US News

Spider was perfectly positioned on officer's windshield
By Jack Phillips

Police dashcam footage captured the moment a spider crawled across an officer’s windshield at the right moment as he was stopping a motorist.

The 30-second video, posted to Facebook by the Fulshear Police Department in Texas, presents an optical illusion, showing the spider emerging from the side before going over to where the officer was standing.

“Who needs Hollywood special effects?” police wrote. “This little guy was positioned perfectly on the windshield of the patrol car and gave our clerk, who was reviewing the video, quite the …  scare.’”

A number of people apparently accused the department of editing the video as some didn’t believe it was real.

“Although we admit, it does look fake. On a large monitor, it’s easier to tell he is walking on the windshield,” the department added, according to the Houston Chronicle.

The video was captured on Oct. 10 during a traffic stop.

It’s not clear what type of spider it is.

In recent weeks, there have been several dramatic instances of police getting involved in shootouts or getting into dangerous situations with suspects during traffic stops.

On Sept. 18, a sheriff’s office in Colorado posted footage of a man rolling out of a stopped vehicle, pointing a gun at officers. “As he continued to advance out of the vehicle deputies shot Askins multiple times, fatally wounding him,” the office said.

The National Law Enforcement Memorial Fund (pdf) said traffic stops are notoriously dangerous for police officers in the United States. The leading causes for officers being shot and killed in 2017 occurred when they were responding to domestic incidents and while conducting traffic stops, the group’s annual report states.