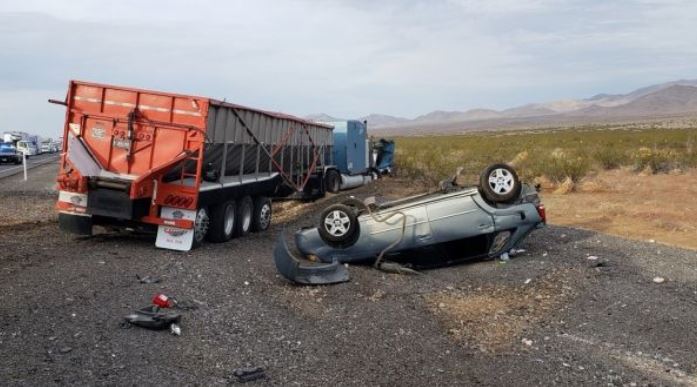 Dashboard footage of a deadly crash in Nevada has been released by authorities.

The crash on U.S. 93 on July 18 took place when a semi-truck, the trailer full of sand, rammed into four vehicles that were stopped in a construction zone.

The two people that were ejected from one of the vehicles, a Toyota Corolla that ended up upside down, and were killed, officials said. They were identified as Christopher Markley, 34, and Robert Jay Barnes, 50.

The Corolla was the first vehicle hit; the semi continued south, striking another semi-truck, a Nissan Titan, and a Chevy Malibu before coming to a stop, officials told KTNV.

The drivers of the two other cars were rushed to the hospital but were later released, as was the driver of the semi-truck that was hit.

The driver of the truck that rammed the four vehicles fell asleep at the wheel, the driver admitted to investigators, reported the Las Vegas Review-Journal.

That driver was also transported to the University Medical Center in Las Vegas.

#trafficalert US93 at mile marker 63, 2x fatal crash involving 4 vehicles. All travel lanes are closed, traffic is being diverted onto SR168. US93 is also closed at IR15. Unknown when roads will reopen, use caution in the area as we investigate. #buckleup #drivesafenv #nhpsocomm pic.twitter.com/1D7MRV1z5g

“Drowsy driving is just as bad as if you were intoxicated or texting and driving … it impairs your ability to drive a vehicle,” Trooper Jason Buratczuk, of Nevada Highway Patrol, told Fox 5.

Buratczuk said the driver of the semi-truck could face charges but that it would be up to fatal crash investigators and the district attorney.

The driver of the semi-truck hasn’t been identified.

The newly released footage shows a construction crew flagger desperately trying to alert the driver but he ends up running out of the way as the truck careens into the four other vehicles.

“We all rely on truckers and trucking companies to follow safety rules to keep us all from serious harm and death on the road. It’s obvious from the video that safety rules were violated,” the families of the men said in a statement obtained by Las Vegas Now.

“Rob Barnes was a beloved son, brother, and friend. He was a talented artist and graphic designer. Rob was a colon cancer survivor and had a renewed enthusiasm for life. Chris Markley was a hardworking and generous son and brother. He held two jobs but always found the time to be a kind and compassionate friend and to care for his beloved pets.”