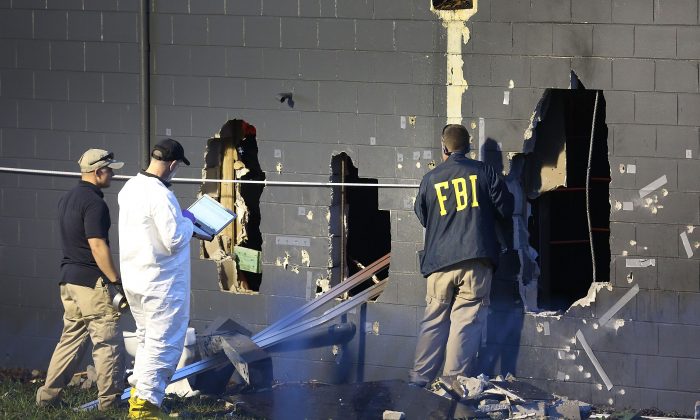 Police officials investigate the back of the Pulse nightclub after a shooting involving multiple fatalities at the nightclub in Orlando, Fla., Sunday, June 12, 2016. (AP Photo/Phelan M. Ebenhack)
Crime and Incidents

Warning: The footage may be disturbing to some
By Denisse Moreno

Shocking footage taken from inside Pulse nightclub in Orlando shows gunshots going off while partygoers are enjoying their night on June 12.

The video was uploaded to Snapchat by Amanda Alvear, 25, who was among those who lost their lives in the deadliest mass shooting in the United States.

Officials say Omar Mateen, 29, opened fire in the gay Florida club and was armed with a Sig Sauer MCX assault-style rifle and a handgun. Police say 49 people died in the shooting, plus Mateen, while 53 others were injured.

The footage, which was obtained by the Mirror, shows Alvear having fun with her friends. It then shows her face and loud gunfire.

An extra officer was working at Pulse and engaged with the attacker near the entrance. Other officers entered and started a shootout with Mateen, who then fled to the club’s bathroom and held some club goers hostage.

The SWAT team set up an explosive breach on the club’s bathroom wall and rescued 30 people. Orlando Police Chief John Mina said Mateen came out through the same hole club goers were exiting from. He then engaged in another gunfight with authorities until he was shot dead.

Other videos of the attack shows what appears to be police engaged in a shootout with Mateen.

Other footage shows the aftermath of the mass shooting, as injured victims were carried away, some taken on a pick-up truck to the hospital.

Before the attack, the shooter had pledged allegiance to ISIS during a 911 call, and during the shootout with police.

ISIS media has called Mateen “one of the soldiers of the caliphate in America.”