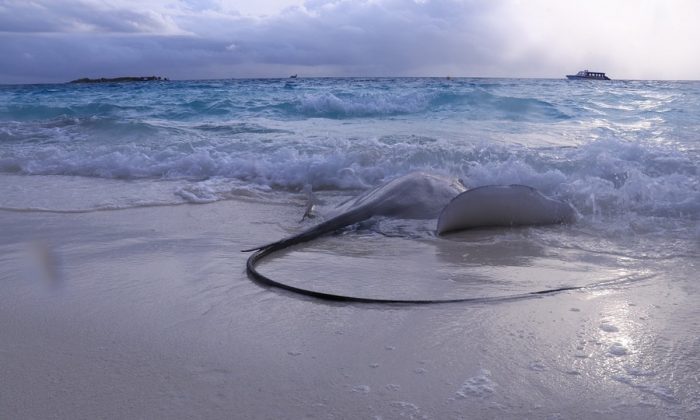 Stock image of a stingray on the beach. (Bobgrg/Pixabay)
Trending

Video: Fisherman Helps Stingray Give Birth To a Pup

An unusual video showed the moment a fisherman helped a stingray give birth.

The fisherman simply applies a small amount of pressure on the marine animal. Then, a pup suddenly emerged.

The fisherman, Terry Conger, then throws them both back in the water.

‘It Feels Like Fire’: 10 to 15 Beachgoers Stung by Stingrays in California

“Calvin Conger, 18, was about to use the ray as shark bait when he noticed another stinger sticking out of it. His father, Terry Conger, instinctively pushed down on it, and they all watched on as a baby stingray popped out. Calvin’s mother, Valerie Conger, caught the incredible moment on camera, while his girlfriend, Hannah Harris, cooed in the background,” according to Barcroft TV.

It added that Calvin was fishing with his family near Port Charlotte, Florida, when they spotted the ray.

According to National Geographic, “Female stingrays give birth once a year. They usually have two to six young at a time.”

(For starters, it’s probably not a very good idea as stingrays are known to attack people):