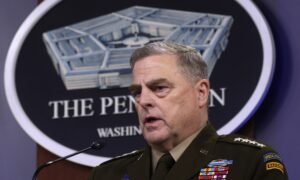 A flare-off at the Chevron oil refinery in El Segundo, California, was seen for miles on Sept. 17.

The department then realized that it was a controlled burn, said El Segundo Fire Department Battalion Chief Breck Slover. He said the refinery lost power and initiated the flare-off for safety reasons.

“It’s a common occurrence, but this happened to be a pretty big one,” he told the LA Times.

A number of people across Los Angeles, including the airport, said they could see it.

Large plume of smoke in El Segundo is a controlled burn-off at the Chevron refinery. It can be seen several miles away. The smoke is definitely catching people’s attention. pic.twitter.com/HxpR5fhXw1

There’s just a massive plume of smoke by #LAX pic.twitter.com/pQGkRi18tl

El Segundo police said the flare-off poses no threat to the nearby community, ABC7 reported.

Other details about the flare off are not clear.

According to Chevron, the oil refinery in El Segundo “provides jobs for more than 1,100 Chevron employees and 500 contractors, covers approximately 1,000 acres, has more than 1,100 miles of pipelines, and is capable of refining 290 thousand barrels of crude oil per day.”

It adds: “Transportation fuels–gasoline, jet and diesel–are the primary products refined from the crude oil. We are responsible caretakers of our land and the environment, we operate our own electricity, steam, and water treatment facilities, and even maintain one of the only two remaining preserves in the world for the endangered El Segundo Blue Butterfly.”

The facility is the largest oil refinery on the U.S. West Coast, producing more than 274,000 barrels of crude oil each day.

El Segundo is a city located in Los Angeles County, California with a population 16,654.