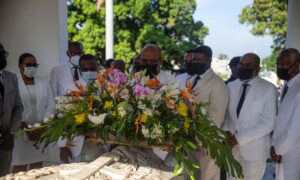 The U.S. Immigration and Customs Enforcement said on March 23 that the tunnel was seized after a lengthy investigation that led to six arrests and confiscation of more than a ton of marijuana.

The trans-border tunnel measured more than 400 yards—300 yards on the U.S. side.

This house and tunnel were constructed under the watchful eye of law enforcement.
— Laura Duffy, U.S. Attorney

The tunnel’s entrance was located in a coffee shop in Mexicali, Mexico, and it’s exit was discovered in a two-bedroom home in Calexico, a border city east of San Diego.

“I’d emphasize that our investigation in this case is still very much ongoing, but preliminarily we believe the shuttering of this latest smuggling tunnel has dealt a serious blow to yet another narcotics trafficking organization that was determined to succeed at all costs,” said Dave Shaw, special agent in charge of Homeland Security Investigations in San Diego.

Officials said they found a three-foot-wide concealed hole in the floor of the house that led several feet below the foundation.

The discovery is the first operating tunnel found in Calexico in almost a decade. Investigators also said it is the first time drug traffickers are known to have purchased property and constructed a residence for the sole motive of hiding the exit of an underground drug tunnel. Officials said the house was completed in December 2015 and cost about $86,000.

For the builders, the financiers and the operators of these passageways, there is no light at the end of the tunnel.
— Laura Duffy, U.S. Attorney

The owners of the property told the construction contractor to leave a space for a floor safe when they poured the cement foundation for the residence, according to the case affidavit. Officials said they believe the space the owners requested was meant to be the tunnel’s exit.

Authorities said that when the construction of the residence was completed, drug traffickers opened the tunnel’s exit to prepare for smuggling activity. Through surveillance and intercepted calls, officials said they believe the trafficking of narcotics began on Feb. 28, and that they are confident that was the first time the tunnel was utilized. On March 7, special agents and the West Covina Police Department seized over 1,350 pounds of marijuana that was headed to Los Angeles.

“This house and tunnel were constructed under the watchful eye of law enforcement,” said U.S. Attorney Laura Duffy.

“For the builders, the financiers and the operators of these passageways, there is no light at the end of the tunnel. We will seize your drugs and your tunnel before you even have a chance to use it,” she added.

Officials said the tunnel found in Calexico is the 12th largest operational tunnel along the California Mexico border since 2006. Officials say most drug smuggling tunnels are found in Otay Mesa in San Diego where the ground is easier to dig.

Meanwhile, residents of the neighborhood were shocked about what authorities had discovered.

You just don’t hear about stuff like this here.
— Juan Urrea, Resident

“This is a peaceful neighborhood. You just don’t hear about stuff like this here,” said Juan Urrea to CNN.

“Crazy. Just crazy,” said Urrea who lives a block away from the tunnel.

“We were happy because they built this new house. I would see a guy and a lady go in once in awhile but only for a few minutes,” said Yolanda Sanchez to CNN, who believed the new residence would help property values.

“And then this morning we wake up with a huge, big bang. Helicopter. Police. I got out of my house, and I said, ‘What’s going on!’ And we find out it’s a tunnel,” said Sanchez about the raid.