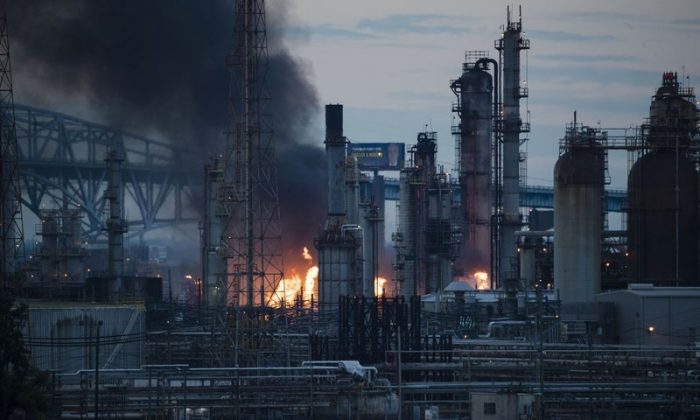 Flames and smoke emerge from the Philadelphia Energy Solutions Refining Complex in Pa., on June 21, 2019. (Matt Rourke/AP)
US News

A major explosion rocked Philadelphia on the morning of June 21, triggering a major fire at an oil refinery in the southern part of the city.

The Philadelphia Office of Emergency Management was asking people to shelter-in-place if they were near the refinery, due to “smoke and apparatus in the area.”

The shelter-in-place zone was later narrowed.

The blast took place at about 3:20 a.m. at the Philadelphia Energy Solutions refining complex and the city’s fire department rushed to respond.

Update: Philadelphia Fire has narrowed the shelter-in-place request to 26th Street to the east, Schuylkill Expressway to the north, I-95 to the south, and 22nd Street to the east due to smoke and apparatus in the area. https://t.co/sku4tfdEuZ

Some residents said the blast knocked art off of their walls, reported NBC Philadelphia. Others said debris dropped into their communities after the explosions were felt.

According to the broadcaster, “The complex is the largest refinery on the East Coast and employs about 1,000 people. Many Philadelphians still call it the Sunoco refinery, though it is now owned by Philadelphia Energy Solutions, a partnership that includes Sunoco.”

“The refinery processes 335,000 barrels of crude oil every day at two plants in the complex—Girard Point and Point Breeze. The fire broke out at the Girard Point portion,” it added.

Social media users posted their reactions as well as pictures and videos. One posted a video of a fireball erupting into the air, writing: “Just witnessed this explosion heading to Philly airport.. praying no one was hurt.”

Just witnessed this explosion heading to Philly airport.. praying no one was hurt pic.twitter.com/S0fcN50HaT

Moments before the explosion pic.twitter.com/kZ7ButGVwM

VIDEO from man on scene. What he saw outside work this morning pic.twitter.com/bZGsr0quWS

Another user posted a video about an hour later, saying he’d just landed in the city.

Landed at 5 a.m. and immediately greeted by an oil refinery fire. My Uber driver is yelling and swearing. Welcome to #Philadelphia! pic.twitter.com/pt3EhsLpbd

The Platt Bridge and the Schuylkill Expressway were both re-opened after being closed earlier in the morning.

No injuries had been reported.

The shelter-in-place zone as of 6:15 a.m. was: 26th Street to the west, Schuylkill Expressway to the north, I-95 to the south, and 22nd Street to the east due to smoke and apparatus in the area.