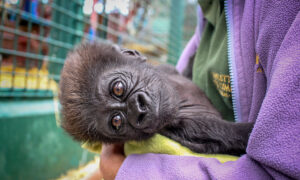 Premature Baby Gorilla Rejected by Mom Is Hand-Reared, Then Adopted by Her Own Great-Grandma
0
Share Now
TelegramFacebookTweetEmailTellMeWeReddit
Copy Link
Animals

"We need to stop killing them," Schwarzenegger said
By Denisse Moreno
biggersmaller
Print

Arnold Schwarzenegger is familiar with high-speed pursuits and dangerous situations in Hollywood movies, but he had a recent chase scene that was unscripted.

The actor was on a safari in Africa when he had a close encounter with an elephant.

In a video posted by Schwarzenegger on social media on May 31, the actor is riding in a jeep with others, while an elephant approaches the vehicle and bumps into the front with its tusks. The tour guide is heard saying that elephants sometimes find corners on the vehicles to scratch themselves on.

The “Terminator” actor is heard in the footage saying, “He’s going to charge.”

The elephant then appears to walk away from the jeep, but then goes behind it and starts chasing the vehicle.

“I couldn’t have written this safari encounter better if it was a movie,” said Schwarzenegger about the close call with the elephant.

“I’m absolutely in awe of these beautiful, strong animals, even though some of us had to change our pants after this,” said the actor.

The former California governor then went on to defend the animals from poachers.

“We need to stop killing them—take a photo, not a shot. Would you rather be able to experience these creatures or a hunk of ivory? I thought so,” he said.