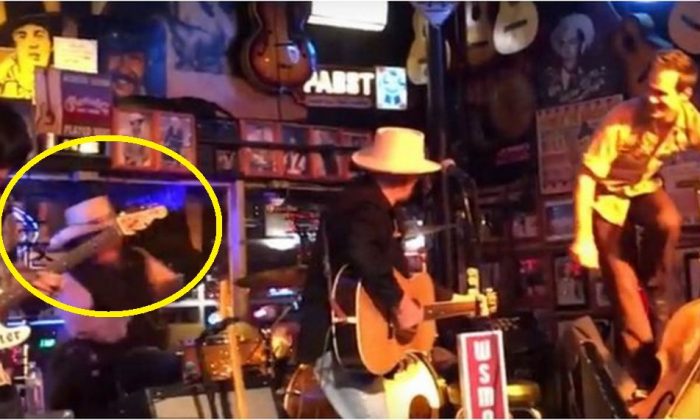 Video: Drummer Falls Out of Nashville Bar During a Set

A drummer with a Nashville country band fell through a window at Robert’s Western World over the weekend, and it was captured on video.

Stan Saxon, with legendary honky tonk group the Don Kelley Band, fell from the front window at the venue. He flipped backwards while the band played “Ghost Riders in the Sky” and broke through the front plate glass window before landing on the sidewalk. The incident was first reported on blog Saving Country Music, which caught it on video.

“My ear monitor pulled me back, felt like somebody grabbed me by the shirt and yanked me to the ground. It was like the window wasn’t even there. The next thing I knew I was looking up at shards of glass going, ‘How did I get out here?'” Saxton told News 2, describing what happened.

Saxon, according to the Tennessean, is reportedly fine. He got back up and started playing again.

Local man Patrick Harrigan told Saving Country Music: “The guy landed on me and another couple with his snare drum on the sidewalk.”

He added: “”What was amazing was how nonchalant everyone was. The drummer just picked up his drum, put it back in the window, walked back in and we shook the glass off and the girl next to me was bleeding and had some cuts. The bartender gave her a Band-Aid and the band played on. It was fantastic,” said Harrigan.”

The window was boarded up and the Don Kelley Band will play again on Saturday evening.

“The Don Kelley Band has been playing on Lower Broadway for the last 30 years at least, and pretty much Don Kelley’s band is the primary school for hot [expletive] Tele [guitar] players in Nashville,” bass player Geoff Firebaugh told Saving Country Music. “The guys that are on all the country records like Dan Huff, Brent Mason, Redd Volkaert from Merle Haggard’s band, Johnny Hiland, they all played with Don Kelley … I’ve seen musicians go down there and you get put to the test. Either you get good or you go home.”