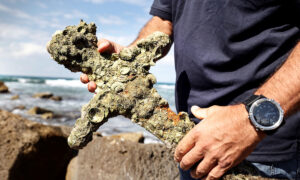 Experts weigh in on restoration.
By Denisse Moreno

Drone footage shows the remains of the city of Palmyra after being recaptured from ISIS by Syrian troops.

Referred to by Syrians as the “Bride of the Desert,” Palmyra sustained major damage during the takeover of ISIS.

Last year, the terrorist group destroyed the Temple of Bel, which dated back to A.D. 32, and the Temple of Baalshamin, a structure of stone blocks several stories high that had six towering columns in the front. ISIS also blew up the Arch of Triumph, which had been built under the Roman emperor Septimius Severus between A.D. 193 and A.D. 211.

However, Syria’s antiquities chief said that there is still hope for the ancient city.

We will need five years to restore the structures damaged or destroyed by IS.
— Maamoun Abdulkarim, Syria's antiquities chief

“If we have UNESCO’s approval, we will need five years to restore the structures damaged or destroyed by IS,” Maamoun Abdulkarim told AFP.

“We have the qualified staff, the knowledge and the research. With UNESCO’s approval, we can start the work in a year’s time,” he added.

Abdulkarim said his team will first have to take photographs and document the extent of the damage before restoration begins, and that eighty percent of the Palmyra ruins are “in good shape.”

He also said a secret effort from his department prevented the full destruction of the ancient city.

“We were working with 45 to 50 people inside the city in order to convince Daesh, with public pressure, not to destroy everything,” said Abdulkarim, using another name for ISIS.

“Daesh saw that there would be a popular uprising against it if it destroyed everything. It didn’t steal and it didn’t destroy everything,” he added.

Abdulkarim said UNESCO will discuss the situation in Palmyra later this week.

However not everyone is hopeful about the city’s situation.

Annie Sartre-Fauriat, who belongs to a group of experts on Syrian heritage set up by UNESCO in 2013 said she is “very doubtful” about being able to rebuild the site at Palmyra.

When I hear that we are going to reconstruct the temple of Bel, that seems illusory.
— Annie Sartre-Fauriat, UNESCO

“Everyone is excited because Palmyra has been ‘liberated’, but we should not forget everything that has been destroyed,” Sartre-Fauriat told AFP.

“When I hear that we are going to reconstruct the temple of Bel, that seems illusory. We are not going to rebuild something that has been reduced to dust. Rebuild what? A new temple? I think there are probably other priorities in Syria before rebuilding ruins,” she added.

Sartre-Fauriat also noted that although ISIS has been pushed out of Palmyra, the war is not over, which means the ancient city is still not safe.

“As long as the Syrian army is there, I am not reassured,” said Sartre-Fauriat. “We should not forget that the army occupied the site between 2012 and 2015 and caused a lot of destruction and pillaging,” she said.

Meanwhile, the recapture of Palmyra signals a major setback for ISIS, which has been losing territory in Syria and Iraq.