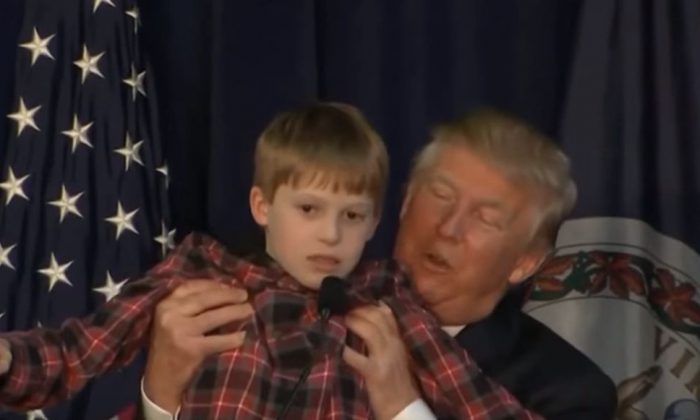 Video: Donald Trump Lifts Up a Child and He Asks: ‘What will the walls be made of?’

Republican presidential candidate Donald Trump is garnering yet more viral attention for hoisting a child up in the air at a rally on Wednesday and allowing the lad to ask him a question.

“What are are the walls going to made out of?” the child asks Trump, referring to the walls that the presidential candidate said he would build on the U.S.-Mexico border. A YouTube clip from Right Side Broadcasting captures it:

It’s worth noting that the child appears utterly terrified as he’s asking the question in front of likely thousands of people.

“It’s going to made of hardened concrete,” Trump said to applause and cheers. “And it’s going to be made out of rebar and steel. That’s what I do.”

As Gawker noted, it looked like something out of “The Lion King” when Baby Simba is being lifted.

The rally where the video was shot was in Manassas, Virginia.