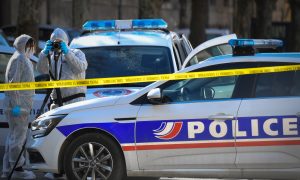 COVID-19 Deaths in Spain Near 11,000 as Hospitals in Catalonia Reach 'Maximum Stress'
0
Europe

A “Christian Patrol” march by the group Britain First through a section of the town of Luton with a heavy concentration of Muslims has sparked backlash from some members of the community.

Members of the group marched through the town with white crosses, clashing with the locals, who allegedly attacked and threw eggs at the marchers. Britain First released a 9 minute video of the March that showed hostile verbal exchanges between the marchers and local residents.

In one encounter, one of the marchers said to a shop-keeper that Britain was a “Christian country.”

“It’s not a Christian country,” the shop kepper replied. “You jealous that we’re taking over?”

In December, four men were charged with inciting support for ISIS in a series of meetings in Luton, and on Jan. 22, two Luton residents were found guilty of trying to gain support for ISIS by handing out promotional leaflets in a busy London street, reported the Independent and the Luton Dunstable.

Ibrahim Anderson, one of the two men found guilty, had images on his computer that contained instructions on how to travel to Syria to support the jihad, the Luton Dunstable reports.

The marchers were denounced by some members of the community for allegedly harassing the town’s Muslim residents.

“I’ve said it before and I will say it again, Britain First, or anyone promoting hatred for that matter, is not welcome in Luton,” Hazel Simmon, leader of the Luton Town Council, said in a statement, ITV reported.

“My heart goes out to the innocent local people who were simply going about their normal lives before becoming victims of a series of cowardly and hate-filled verbal attacks against their faith.”

Bedfordshire county police are investigating whether any crimes were committed during the March, the Lunton Dunstable reports.

Navy Probe to Decide Future of Fired US Carrier Commander
0