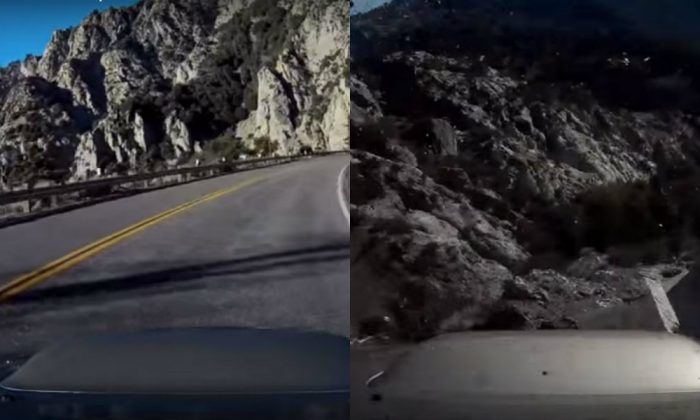 Video: Car Drives Off the Side of a Mountain Near Los Angeles on Angeles Crest Highway

An incredible dashcam video captured a man driving off the side of a mountain road in California.

The incident took place along the Angeles Crest Highway, located in the San Gabriel Mountains in Los Angeles County.

A YouTube user uploaded the clip of the crash on Monday, but it was actually taken a year ago, reported the San Gabriel Valley Tribune.

According to a note the YouTube user posted online, “This past Sunday, Jan 4, 2015, I received a second chance at life.”

He was driving his 2004 Subaru Forester XT on the Angeles Crest Highway for fun. “As an auto enthusiast, when you have a nice relatively fast car with a loud exhaust you tend to like tunnels,” he wrote. “They make your exhaust sound that much better, sort of like singing in the shower.”

As he approached a tunnel, he didn’t see the road on the sunny day, but he saw a person on the side of the road signaling something to him.

“Wondering what they were doing, I stared, and stared, reaching the top of 4th gear, all while trying to comprehend what they were trying to tell me,” he wrote. “Then I figured it out. They were telling me to slow down and watch the curve ahead, but it was too late.”

He didn’t realize the road ahead was curved and he then slammed on his brakes before skidding across the road, driving off the edge of the highway before his vehicle tumbled down the side of the mountain.

“It happened so fast all I can remember is everything crashing and spinning,” the user wrote. “I was on the world’s worst roller coaster that could only end with death.”

His car then came to rest on a drainage pipe on the side of the mountain, and he got out of his car unscathed.

Among his rescuers was Lou Ferrigno, the actor and bodybuilder famed for playing the Incredible Hulk.

Ferrigno told him to buy a lottery ticket.