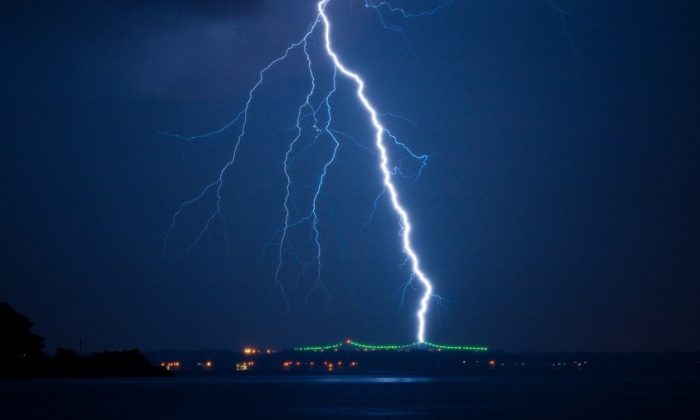 A dramatic video shows the moment lightning struck a sailboat in the Boston Harbor, causing sparks to fly.

There were no injuries during the incident, which took place as powerful storms rolled over Massachusetts on July 6.

The National Weather Service (NWS) posted a warning for heavy rainfall and flooding in the Boston on Saturday. “Doppler radar indicated thunderstorms tracking southward through the warning area. These thunderstorms are producing 1 to 1.5 inches of rainfall. As a result of this rainfall, areas of urban and poor drainage flooding are expected,” the agency’s Boston office wrote on Twitter.

The video was captured by Harry Minucci, who said his friend’s 40-foot sailboat was hit. The owner was not on board, WCVB reported.

The clip was shot at the Columbia Yacht Club in South Boston.

According to the report, Minucci said there was a significant amount of electrical damage done after the strike.

In the comments section for ABC News’ Facebook post of the video, one woman wrote, “We were very close on our boat when this happened yesterday. Very scary.”

“And people wonder why I am afraid of thunder and lightening yikes (sic),” said another.

“It happened to my brother’s boat,” added another. “He was hit in the back of the head with one of the panel switches while standing in the galley. Also, took out several of the neighboring (4-5) electrical hookups at the club. VERY scary stuff!”

“That is why we always ran a chain from the mast into the water when moored. Not sure if it would work but it made us feel better,” another said.

A Florida man made the video of a lifetime, capturing the moment lightning struck the ocean.

Clint Blevins shot the incredible footage near Daytona Beach, showing the moment a bolt hits the water. Luckily, no one was swimming at the time.

The lightning is seen leaving a vertical streak following the strike.

“It is very possible that a main strike can be followed by 30 or 40 secondary strikes,” says an article in HowStuffWorks. “Depending on the time delay between strikes, we may see what looks like one long-duration main strike, or a main strike followed by other flashes along the path of the main strike.”

According to the National Severe Storms Laboratory, the odds of being hit by lightning in the United States stand at about 1 in 3,000. “Lightning can have 100 million to 1 billion volts, and contains billions of watts,” it says, adding, “Energy from lightning heats the air anywhere from 18,000 degrees Fahrenheit to up to 60,000 degrees Fahrenheit.”

Last month, a motorcyclist was hit by a bolt of lightning while traveling down Interstate 95 in Volusia County, Florida.

“This is what’s left of a 45-year-old man’s helmet after he was struck by lightning, while riding his motorcycle southbound, on I-95 in Volusia County this afternoon,” the highway patrol’s Orlando office wrote on Twitter.

The U.S. National Weather Service (NWS) noted that lightning “is s a major cause of storm-related deaths” in the United States each year.

“A lightning strike can result in a cardiac arrest (heart stopping) at the time of the injury, although some victims may appear to have a delayed death a few days later if they are resuscitated but have suffered irreversible brain damage,” says the weather agency.