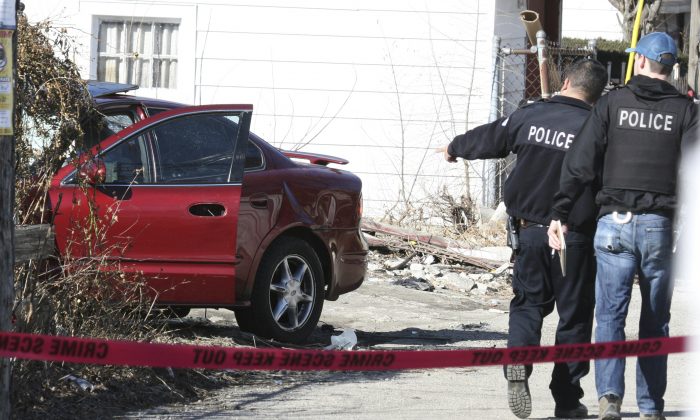 CHICAGO—Police are examining dramatic video that captured a shooting that killed a toddler and a man authorities say was the intended target.

The video , streamed live on Facebook, was taken from inside a car driven by a young woman who was wounded in the shooting. The man and 2-year-old Lavontay White were also in the car.

The woman and man can be seen listening to rap music before more than a dozen shots ring out. Screaming is heard as the footage becomes jumbled but shows the woman exiting the car and running toward a house. The video goes to black, but the audio continues and people can be heard yelling, “Oh my God,” ”I can’t breathe,” and “Please, no, no.”

Police suspect the 26-year-old man, identified Wednesday by the Cook County Medical Examiner’s office as Lazarec Collins, was the target of a gang hit. The man was Lavontay’s uncle and a documented gang member with an extensive criminal history. According to the Illinois Department of Corrections, Collins was convicted of felony charges of burglary and armed robbery and was released on parole last June.

Police have confirmed the authenticity of the video and it is part of their investigation, spokesman Frank Giancamilli said. No arrests had been made as of Wednesday.

He said the woman, who is pregnant, was shot in the abdomen. Both she and the fetus were expected to survive.

Lavontay was one of three children fatally shot in Chicago in recent days.

On Tuesday morning, an 11-year-old girl who was shot in the head over the weekend died. Hours after Takiya Holmes died, a 19-year-old who was being sought by police turned himself in. Antwan C. Jones was charged with first-degree murder. At a hearing Wednesday, a judge ordered Jones to be held without bond.

Chicago police spokesman Anthony Guglielmi said Jones has an extensive juvenile arrest record and a record as an adult that includes an arrest on a felony charge of aggravated assault after allegedly attacking a teacher.

Jones spotted three people outside his home, determined they didn’t belong there and went inside and got a handgun, police said. He came outside and started firing, striking Takiya but no one else, said Brendan Deenihan, a commander of the detectives’ unit handling the investigation.

Police found Jones by contacting people in a video of the shooting. Guglielmi said no gun has been recovered. Jones doesn’t have a listed number to pursue comment.

The Cook County medical examiner’s office said late Wednesday that Kanari Gentry-Bowers, the 12-year-old girl also shot over the weekend, has died. She had been on life support since the shooting.

Also Wednesday, Chicago police said five people were shot, three fatally, in an apartment on the city’s Southwest Side. Circumstances surrounding the shooting were not immediately clear.