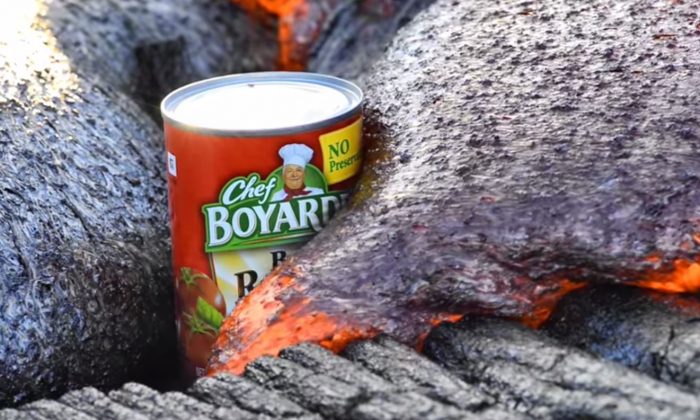 Video: Can of Soup Vs. Lava

First off, this can of Chef Boyardee ravioli is “expired,” according to the uploader.

And while this experiment is a bit dumb, it’s still totally mesmerizing to watch.

Some have asked why people don’t just throw their trash into lava, but it’s simply not that feasible.

As Slate’s Daniel Engber wrote on a question about dumping nuclear and toxic medical waste into lava:

The answer: Because the hazardous parts would come right back out.

We do incinerate more than 90 percent of the medical waste in the United States, both to reduce its total volume and to kill off infectious agents. But burning up blood-soaked bandages, discarded needles, and stray organs like tonsils and appendices creates many dangerous byproducts, including dioxins and carbon monoxide, as well as fly ash laced with heavy metals. While an onsite incinerator at a hospital would be equipped with scrubbers and filters to capture these byproducts for landfill, any gases or ash produced in a volcano would be emitted straight into the atmosphere.

It’s also not clear that volcanic incineration would be hot enough to sterilize garbage. According to the Environmental Protection Agency, medical waste should be burned at more than 1,600 degrees Fahrenheit, with some states demanding temperatures of 1,800 or 2,000 degrees to reduce volatile organic emissions. Molten lava can be hot enough to do the trick, measuring about 1,800 or 1,900 degrees on average. But the exact temperature varies widely depending on the volcano. The unusual black lava at Tanzania’s Ol Doinyo Lengai, for example, can be as cool as 930 degrees.