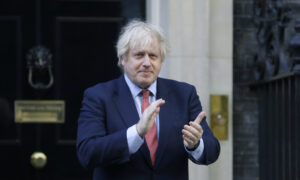 Shooting at a Business Meeting in France Kills Three
0
Europe

Video: Brussels Ran TV Ad Bragging That It Had No Problems With Terrorism

Two months before the ISIS bombing of an airport in Brussels, Belgium, that killed more than 30 people, the city ran a television ad campaign touting the absence of terrorism there.

The ad campaign aimed at curbing the perception that Brussels was a seedbed of Islamic terrorism.

“Did you see some people who are fighting with guns or bombs?” one caller asked.

“No! Oh my god, no way!” a Brussels woman in the ad replies, chuckling.

The ad campaign aimed at curbing the perception that Brussels was a seedbed of Islamic terrorism, after it was revealed that two of the suspects in the Paris ISIS attack, which had killed 130 people, were from the district of Molenbeek in Brussels.

France was put on a national state of emergency after the Paris attacks, which is still ongoing and is expected to continue through late May.

Related Coverage
ISIS Supporters Praise Paris Terrorist Attacks with #ParisBurns
When it became clear the attacks were planned in Molenbeek, I was not surprised. The real surprise? That Belgium expressed shock at the connection.
— Teun Voeten, local resident

Some neighborhoods of Molenbeek became Islamic enclaves, where alcohol was no longer sold in most supermarkets, Western women were often harassed for how they dressed, and Salafists tried to convert people on the streets, according to Teun Voeten, who lived in the city for 9 years.

“When it became clear the attacks were planned in Molenbeek, I was not surprised. The real surprise? That Belgium expressed shock at the connection,” Voeten wrote.

The ad was created to counter criticism, like Voeten’s, leveled at the city.

“After Brussels was linked to terror plots, the international media portrayed the city as a warzone,” the ad states. “We wanted to change this perception with an honest answer.”

At one point in the ad, a man is seen answering standing at a phone booth in the district of Molenbeek.

“If you want to come to Molenbeek, you are welcome. Don’t listen to CNN or BBC or anything else,” the caller says.

The ISIS attack in Brussels targeted the airport and the subway, killing and injury dozens and putting the country’s transportation system on hold.

The prime minister of Belgium has announced a three day mourning for the victims of the attack.