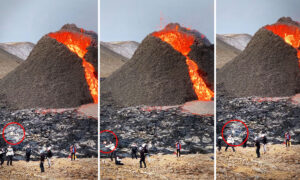 Video: Breathtaking Performance by Italian Pianist as He Floats Among Crumbling Arctic Glacier

An acclaimed Italian pianist and composer performed a stunning concert, while floating in the Arctic surrounded by falling glaciers.

Ludovico Einaudi, along with his grand piano, were taken by Greenpeace ship Arctic Sunrise to perform at the Wahlenbergbreen glacier in Svalbard, Norway, in an effort to draw attention to the threats in the region.

Einaudi composed a special piece for the occasion, “Elegy for the Arctic,” which was performed on top of a floating platform as ice cracked, rumbled and fell, even startling the composer before he began the piece.

The organization says the performance is a message for governments to save the Arctic from threats like oil drilling and destructive fishing.

The stunning concert, documented by the non-profit, comes as delegates meet at the OSPAR Commission in Tenerife, Spain.

Greenpeace says the delegates “have an opportunity to take an important step in protecting the Arctic.”

“The proposal before them would safeguard 10 percent of the Arctic ocean, an area roughly the size of the U.K.,” said the organization on June 20.

Three countries, Denmark, Iceland, and Norway, where the concert took place, are listening to corporate interests, and have been resistant to protecting the Arctic, Greenpeace says.

“It is urgent,” said the organization.

“The Arctic ocean is the least protected sea in the world, its high seas currently have no legal safeguards. As the ice cover decreases with rising temperatures, this unique area is losing its frozen shield, leaving it exposed to reckless exploitation, destructive fishing trawlers and risky oil drilling.”

“We must show them that what they have is unique, that the Arctic is worth protecting and not to be risked for short term profit,” added Greenpeace.

Einaudi, who also composed music for the movie “Black Swan,” and television series “Doctor Zhivago” said the concert was a great experience for him.

“I could see the purity and fragility of this area with my own eyes and interpret a song I wrote to be played upon the best stage in the world. It is important that we understand the importance of the Arctic, stop the process of destruction and protect it,” he said.