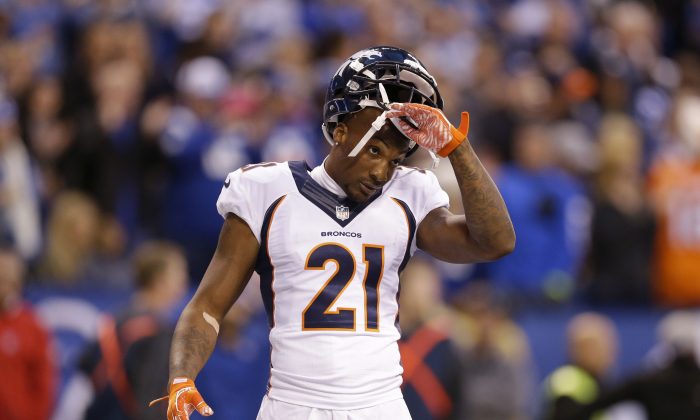 Denver Broncos cornerback Aqib Talib (21) takes off his helmet during the first half of an NFL football game against the Indianapolis Colts, Sunday, Nov. 8, 2015, Indianapolis. (AP Photo/Michael Conroy)
NFL

Talib drew a 15-yard unsportsmanlike conduct flag during the game on Sunday.

Aqib Talib appears to have poked Dwayne Allen in the eye. pic.twitter.com/XwdT5dcWhL

The penalty allowed the Colts to continue a late drive, helping them run out the clock in the fourth quarter to ultimately get the win.

In the incident, Allen got in a heated exchange with Broncos linebacker Von Miller during a running play when Talib came in put his hand in Allen’s facemask when he wasn’t looking. He apparently poked Allen’s eye, drawing the penalty.

A stupid and ridiculous move by Aqib Talib

Aqib Talib should be suspended maybe the rest of the year after that too. He’s an embarrassment.

A number of users on Twitter said Talib should have been ejected and should be fined for the eye poke. Some said he shouldn’t play another snap of football for the dirty play.

Talib wasn’t all to blame in Denver’s loss. In the first half, Broncos quarterback Peyton Manning got off to a terrible start. The first six offensive possessions resulted in five punts and an interception. Right before the end of the first half, the Broncos were down 17-0 until an 83-yard punt return got them points on the board. Meanwhile, Colts quarterback Andrew Luck pulled off a gritty performance, throwing 252 yards and two touchdowns–even after Indianapolis’ offensive coordinator Pep Hamilton was fired a few days ago.