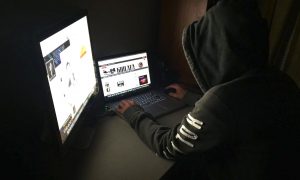 Anonymous, the international hacker group, has released a “call to arms” to encourage “every able person with a computer” to target Donald Trump.

In a 3 minute video, Anonymous said what it has seen from Trump is “deeply disturbing,” citing that the presidential candidate’s “inconsistent and hateful campaign has not only shocked the United States of America,” but has “shocked the entire planet with [his] appalling actions and ideas.”

Trump was targeted by the “hacktivist” group in December 2015 in response to his call for a “total and complete shutdown of Muslims entering the United States.”

April 1st, 2016—April Fool’s Day—has been designated as the date of attack and with the hashtag #OpTrump to be used as a rallying reference.

Last December, Anonymous also took issue with Trump after the candidate’s proposal to ban Muslims from entering the United States.

“Donald Trump, it has come to our attention that you want to ban all Muslims from entering the United States. This policy is going to have a huge impact. This is what ISIS wants. The more Muslims feel sad the more ISIS feels they can recruit them,” a masked member of the group said in a video.

“The more the United States appears to be targeting Muslims, not just radical Muslims you can be sure ISIS will be putting that on their social media campaign,” the figure continued, then added:

“Donald Trump, think twice before you speak anything. You have been warned.

Following the video, the group said it would target the website of Trump Towers in New York, and indeed the site was down for several hours over two days.

Anonymous has previously declared war on the online efforts of ISIS, working with other hackers to take down the sites of the terrorist organization.