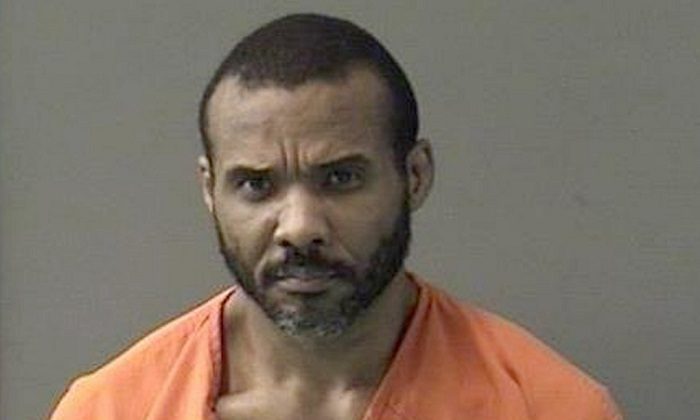 Cedric Marks is suspected in the deaths of his ex-girlfriend and her friend. Their bodies were found buried in a shallow grave in Clearview, Oklahoma, on Jan. 15. 2019. (Bell County Sheriff's Office via AP)
US News

CONROE, Texas—An MMA fighter suspected in two murders who escaped from a prison van near Houston was recaptured less than a mile away still wearing his jail-issued orange jumpsuit thanks to a local company’s surveillance video, police said on Feb. 4.

Cedric Joseph Marks escaped from the van Sunday morning when guards with the Texas Prisoner Transportation Service stopped at a McDonald’s in Conroe, about 40 miles north of Houston. Two guards in the van were transporting 10 prisoners, the Conroe Police Department said in a statement.

Cedric Marks was taken into custody after a nine-hour manhunt involving multiple law enforcement agencies, Montgomery County sheriff’s Lt. Scott Spencer said in a tweet Sunday evening. Marks was found hiding in a trash can and surrendered without incident, Conroe police said on their Facebook page.

Police and the company have not commented on why the van stopped at the fast-food restaurant or how Marks escaped. Authorities have said the 44-year-old middleweight fighter was wearing leg, hand, and belly restraints when he managed to flee.

No guards or other prisoners were injured in the escape, Conroe police Lt. Dorcy McGinnis said Monday.

The search for Marks narrowed after surveillance video showed him near a business in Conroe, McGinnis said. He was found hiding in a trash can in a residential neighborhood less than a mile from the restaurant around 4:45 p.m.—about nine hours after he escaped.

A person who answered a phone number listed for Texas Prisoner Transportation Service said Monday that no one was available to comment on the escape. The private company says on its website that all its transportation specialists have a minimum of two years’ experience in law enforcement, corrections or the military, and that the company treats all detainees “as maximum security.”

It is not clear which state or local authority contracted the company to transport Marks and the other prisoners.

Marks was being held Monday in the Bell County Jail on charges including capital murder, burglary and violating a protective order, according to online jail records.

He is suspected in the killings last month of his ex-girlfriend, Jenna Scott, and Scott’s friend, Michael Swearingin, in the Central Texas city of Temple. Both disappeared on Jan. 4. Their bodies were found Jan. 15 buried in a shallow grave in Clearview, Oklahoma.

BREAKING: The Montogomery Co. Sheriff says Cedric Marks escaped his prison transport. Last seen wearing an orange jumpsuit and constraints. They also said he has three pending murder charges — new info we have not been able to report. pic.twitter.com/mIqE0AcJwj

Marks was initially arrested in Michigan last month on a burglary charge in Bell County, Texas, alleging he had broken into Scott’s home in Temple in August. He was being transported to Bell County to face that charge when he escaped. Murder warrants were issued Sunday.

“Each time he allowed me to regain consciousness and then he choked me out again,” Scott said in an affidavit.

Two women were arrested in Michigan on charges related to Marks.

Maya Maxwell is charged with evidence tampering and is jailed in Bell County, Texas, on $150,000 bond. According to an arrest affidavit, she told detectives that she drove Swearingin’s vehicle to Austin in an attempt to hide it from investigators. It was found abandoned in the city Jan. 6.

Ginell McDonough, who is Marks’ wife and the mother of two of his two children, is jailed in Muskegon County, Michigan, on an obstruction of justice charge. She is accused of allowing Marks and Maxwell to stay in her home between Jan. 5 and Jan. 9.

Jail records do not list an attorney for either woman.

Marks compiled a record of 31-28-0 during his professional MMA career, which began in 1999, according to mixedmartialarts.com. His last fight was in September.