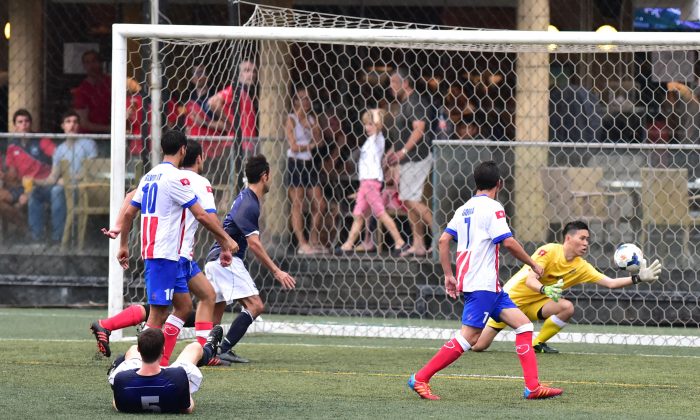 HONG KONG—The round of the BOCG Life HKFA Premier League was postponed due to the international game between Hong Kong and Burma (officially known as Myanmar) on Saturday, Nov 7 at Mongkok Stadium.

Hong Kong took the lead against Burma in the 3rd minute when Jaimes Mckee headed in Ju Yingzhi’s corner, and extended their lead in the 33rd minute when Chan Siu-ki scored from close range after Leung Chun-pong’s shot was saved. Hong Kong added a third after 45 minutes when Jaimes Mckee finished approach work from Xu Deshuai and Lo Kwan-yee. Hong Kong extended their lead to 4-nil in the 66th minute when Alessandro Ferreira finished after Alexander Akande’s shot was saved, and then ran out 5-nil victors when Alexander Akande scored from Lam Ka-wai’s pass.

HKFC lead the table with 20 points from 9 games, with Citizen second with 18 points from 8 games, Sun Hei and Yau Tsim Mong joint third on 17 points from 9 and 8 games respectively.

Eastern District lead the table on 18 points from 8 games, with Sham Shui Po and Sai Kung joint second with 16 points from 7 matches.

Central and Western lead the table with 25 points, with Hoi King second with 24 points.

Yau Yee League
In the first division, Albion were 7-nil victors over Swiss XI, Wanderers were 5-nil winners against HKU70’s, USRC drew 1-all with the Store House Squadron, GAS won 3-2 against Colts, and Baker Tilly Spartans were beaten 3-nil by HKDC Mobsters.

GAS and Albion lead the table with 21 points from 8 games, with Wanderers third with 19 points from the same games, and KCC Dragons fourth with 15 points.

KCC Knights lead the table with 18 points, with Azzurri second with 17 points, and French Kiss and IUSC (Tai Po) joint third on 15 points, all from 8 games.

In the third division, HOB drew 2-all with HKUSA, Green Cypress FC were beaten 5-2 by Grasshoppers, Goal Visio were 6-2 victors over ANP, Yan Po were 3-nil winners against CSOB, White Youth won 2-1 against HKSS, and Dynamo were 4-nil victors over CAPS.
Dynamo lead the table with 21 points from games, with HOB and Yan Po joint second with 17 points, and Grasshoppers fourth with 16 points, all from 8 matches.

In the fourth division, Hung Art won 4-2 against Darts, Skyline won 2-1 against Rising Sun, Outward Bound were 2-nil winners against Scorpions, Standard Chartered were 3-nil victors over Bapcoll, Friends of Barclays were 3-2 winners against Power 22, and Maccabi HK were 4-1 victors over WYFC84.

Friends of Barclays lead the table with 22 points, with Maccabi HK second with 21 points, Scorpions third with 16 points, and Outward Bound fourth with 15 points, all from 8 games.